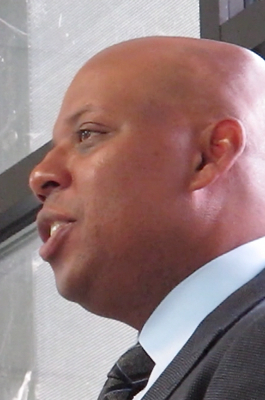 Fulton Meachem is little more than half a year into his new job as CEO of the Charlotte Housing Authority. His presentation to the Tuesday Morning Breakfast Forum suggested that he has not had smooth sailing.

The Friday before his presentation, he had announced to his staff how sequestration would affect their work and the workforce: 10 layoffs, some furloughed days ahead, other cuts, a tptal of $2.5 million taken out of the authority’s budget, which is almost entirelly funded by the federal government.

And that was only the beginning.

With nearly every passing question, Meachem outlined a vision of action – and then raised questions about how the vision would be funded.

In general, his solution is to “partner” with groups in the community that can help pay the bills, and ramp up the Authority’s property management work for private-sector apartment owners, using the “profit” portion of such management fees to support tenant services, supplemental educational services for children growing up in Housing Authority projects.

In his comments below, he addresses how he may fight the “not-in-my-backyard” response of most neighborhoods whenever assisted housing is announced.

During the presentation, Meachem passed out a folder including the following items: a one-page primer about the authority; a four-page “Overview of the Charlotte Housing Authority” of PowerPoint slides (not shown during presentation); an 8-page review of four Hope VI grant-funded developments:  First Ward (1993), Arbor Glen (1996), The Park at Oaklawn (1998), and Seigle Point (2003); and a 3-page review of Developments in Process. The originals were in color; these PDFs are in black and white.