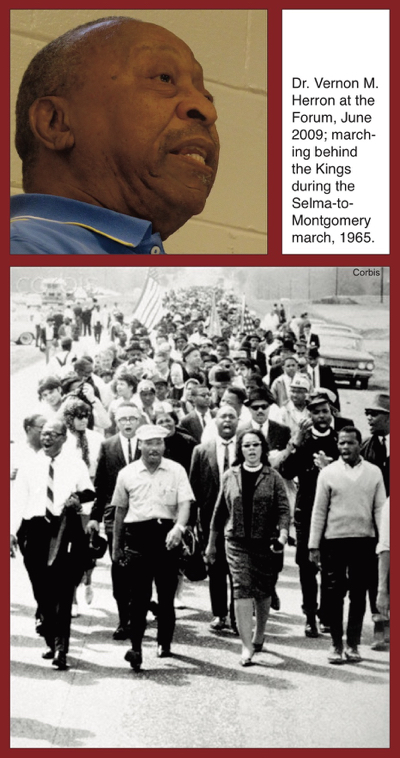 Charlotte native Dr. Vernon M. Herron was a Forum regular until just a few weeks before his May 16, 2015 death. In August 2009, the Forum stopped serving breakfast and limited the offerings to coffee. By October, Herron was insisting on allowing Forum participants to donate toward the cost of the coffee. If a donation cup was not out with the coffee when he arrived, he converted an empty cup to the purpose and made the first donation.

This Fund has been named for Dr. Herron in tribute to the sense of personal responsibility that illuminated his life. He marched behind Martin Luther King Jr. and Coretta Scott King. As a minister he pastored five congregations. From August 2008 through September 2014 he wrote about his life experiences in a blog.

Below are the fund’s financial records since the Forum moved to its coffee-only format in summer 2009. Fund custodian Steve Johnston may be reached by e-mail or at 704-408-3348. From 2003, when the Forum began providing refreshments after leaving McDonald’s Cafeteria, which closed, all funds in excess of expenses were donated to community causes.

In August 2010, responding to budget cuts at Park & Recreation, which operated the Forum’s meeting place, convener Sarah Stevenson decided to contribute coffee pot funds in excess of expenses each month to the Rec Center in support of its mission. From 2010 through 2015, those donations went to Partners For Parks, and are recorded below in red under “Purchase/Contribution.” From 2011 through 2015, Park & Recreation with some regularity sent thank-you notes acknowledging the donations. PDF files contain those notes from 2011, 2012, 2013, 2014.

With the move in January 2016 to the Belmont Regional Center, convenor Sarah Stevenson decided to direct the donations to the City of Charlotte’s Dispute Settlement Program. No easy way to accomplish that purpose materialized.

In April 2016, Stevenson approved the creation of the MJ Entrepreneurial Action Fund and the transfer each month of excess coffee funds to the Action Fund. More information on the Action Fund is on that page.

When Raphael Basisa donated $200 toward Forum expenses in January 2019, that money was set aside to upgrade the coffee service via purchase of coffee from Mecha Cafe. More on that decision is here.

In April 2019, donated breakfast food was added on an occasional basis. The food is free to Forum participants, and the donors receive no monetary compensation. Donors’ identities will be noted adjoining the food at the donors’ option. The coffee page notes when food was available.

The Forum is not a legal entity. It has no financial or other assets, except its people. While the Forum is full of persons each Tuesday, and is open to all persons and could even be said to be personable, it does not claim the status of personhood. The Coffee Fund and the Action Fund account for all there is to report..

COVID-19: The 2020 coronavirus pandemic and the closeout of this Coffee Fund

Much of the world abruptly shut down in early 2020. People were told to stay home, and work from home if they could. Most retail stores,  restaurants and bars – wherever people were liable to gather – were ordered closed. The Forum cancelled its March 17 meeting. The enemy was a new virus for which perhaps no person on earth had specific immunity. Hospital intensive-care units were overrun; protective equipment ran short. The virus took its greatest toll among the elderly, those made vulnerable by previous medical episodes, and those in the medical and emergency service professions who came to the aid of the sick.

By mid-May, some state restrictions on movement and gathering were eased, but many people remained in their homes. More than 86,000 people in the United States had died since late 2019, and more were dying daily. Globally, more than 4 million people had gotten sick; 304,000 had died.

There was no way to tell when the stay-home orders would lift enough for the Forum to renew its meetings, which in 2019 drew an average of more than 50 people. It seemed highly unlikely that a take-what-you-want coffee table would meet health standards in the post-pandemic age of masks, gloves and social distancing. If Forum meetings returned, they would face a new reality. It was time to close out the Coffee Fund, and account for all funds that will be available should the Forum restart hospitality efforts in another fashion.

On May 15, about two months after the first Forum meeting was cancelled, all coffee equipment and supplies were removed from the Belmont Center. The equipment belonged to Quartermaster Steve Johnston. To close out the fund, Johnston, who had purchased coffee and condiments and such and was responsible for any excess inventory, rebated the Coffee Fund for the full retail value of the remaining inventory.

To close out the financial records, rebates were recorded for remaining coffee and condiment inventory, and the associated Action Fund and the Mecha Coffee Fund were zero’d out. The final total in the Fund will be dispersed at the direction of the Forum leadership at a later time.

In September 2021, with in-person meetings no closer on the horizon than when the funds were zero’d out, a born optimist and one of Charlotte’s own now serving North Carolina people everywhere from a base in Raleigh nevertheless added a $100 donation to the accumulated balance.

This note will cover some issues in the records below from 2003 through summer 2009.

When the Forum settled at the West Charlotte Recreation Center in July 2003, Steve Johnston would normally arrive early, start coffee, then use the center’s kitchen to make small breakfast sandwiches from food purchased that morning at a grocery. Records were kept about free-will donations, the cost of supplies, and Johnston’s habit of crediting back to the fund the retail value of any leftover food.

Intermittently beginning in summer 2006 through summer 2009, a Forum participant prepared food at home. No financial records were shared with the Forum. In 2009, the Parks & Recreation Department forbade on-site consumption of food not prepared in a commercial kitchen. With no resource stream available to subsidize such purchases, the Breakfast Forum became effectively a coffee forum art that point.

While there are gaps in the surviving records below, food and beverage service was mostly continuous during this period.