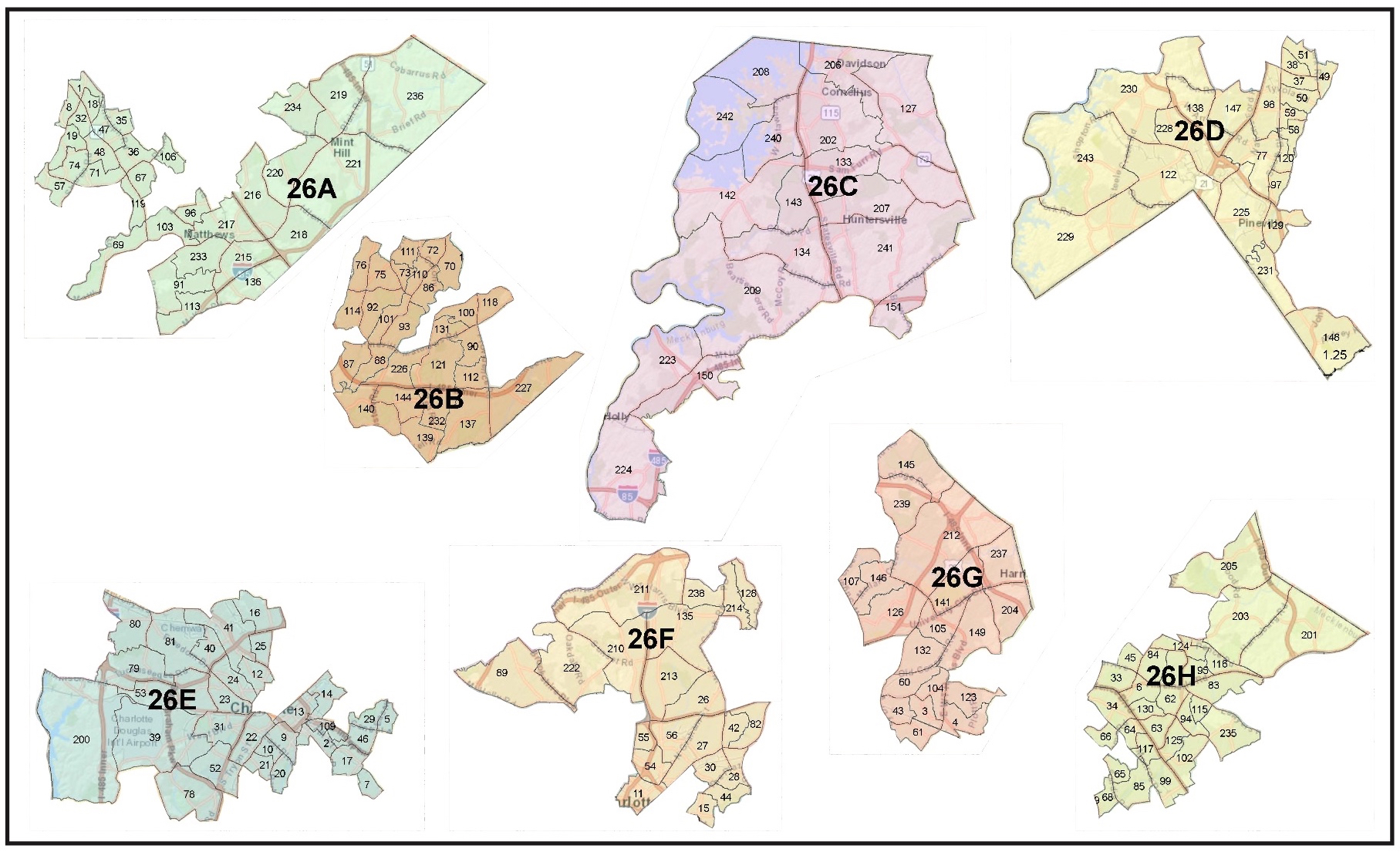 In a March 2017 General Assembly decision that became effective with this 2018 election cycle, District Court judges will stand for election or re-election in partisan contests.

Mecklenburg judges, who previously were elected in a single district identical to the Mecklenburg County line, must now stand for election in one of eight geographic districts. In the material below, this site will refer to “sitting judges” rather than “incumbents” for that reason.

The legislation created the districts shown above. All are shown on the same scale. All have roughly the same number of voters; densely populated areas of the county therefore create smaller districts.

But one would be hard pressed to say that they are compact. They split political city and town jurisdiction. They split neighborhoods. Once they are in use, voters will see if they prove to favor one party or another. Already, judicial candidates are referring to them as “gerrymandered.”

Collected on pages linked here will be more information about the districts and the judicial candidates running in them. Follow the links underlining words for more information. And please e-mail us if you find errors.

Notes to voters accustomed to a long slate of Superior Court and District Court judges on their ballot:

– Not all judges serving in Mecklenburg will be on the ballot this year.

– Only judges elected in the district that includes your precinct will be on your ballot. Your neighbors a few streets over may vote for different judges if they vote at a different precinct.

– For District Court, some districts will elect two judges; some will elect three. But the top two or three vote-getters may not be the ones donning robes. Candidates file for Seat 1 or Seat 2 or Seat 3. For many seats, the sitting judge is unopposed for re-election – or for election, if appointed earlier to fill an unexpired term. One open Superior Court seat drew three candidates. The other three Superior Court seats and nine District Court seats on the ballot this year drew only one or two candidates.

Finally, voters in District 26 D in southwest Mecklenburg will not see any local judicial elections on their ballot this year. In addition, unopposed candidates mean there are effectively no local judge decisions for voters to make in Districts 26E, 26G, and 26H. So in four of the eight districts, there are no local judge choices to be decided.

Who will you vote for?

To learn which judges you will have a vote on, the first step is to find the judicial district for the precinct at which you vote. The Board of Elections operates a look-up tool here. If you lived where the Forum meets, for example, you would vote in Precinct 14 at Hawthorne Academy, and see Judicial District 26E candidates on your ballot. To find out who is a candidate in District 26E, keep reading.

How to find material

From time to time, judicial candidates speak at the Forum. Candidates and their supporters also announce campaign events. And along the way, other material about the candidates will be published elsewhere. All of that material will be linked to the appropriate candidate page.

As the campaign develops, this site may find new ways to sort this information. We’ll start with these:

Click on district links for additional information on the district and the candidates.

There are no Superior Court elections. For District Court Seat 1, sitting judge Matt Osman, a Republican, is unopposed.

Superior Court Seat 1 is listed as a new seat and there is no sitting judge running. Candidates are George Bell, a Republican; Howard L. Clark III, a Democrat; and Reggie E. McKnight, a Democrat.

There are no Superior Court or District Court seats on the ballot.

There are no Superior Court seats on the ballot. For District Court Seat 1, sitting judge Rickye McKoy-Mitchell, a Democrat, is unopposed.

As candidate pages are created for material on this site, links will be added to the names below.