Few contested elections in this democracy are as important or as overlooked as the ones by which many lawyers are first elected to the District Courts of North Carolina.

And in what was said and in the body language on display at the Forum this morning as eight such candidates presented themselves, it was easy to be reminded that all of the candidates are genuine, generous people who seek to serve their fellow citizens, and it might be great to vote for them all.

Only … they’re not running at-large where the top vote-getters win. Some are running against others. Others have no opposition.

So on this page we’ll try to sort out all that. Then, when two candidates are facing off, we’ll put on a linked page all that was said this morning by those two. This may be messy, but perhaps it will be good voter education.

As we collect information from other groups, both nonpartisan and partisan, we’ll try to present those cues as well. Here’s to voter education!

Much was said this morning about candidate ratings released by the North Carolina Bar Association. Those ratings, of incumbent judges in May 2011 and of candidates in March 2012, represent results of a survey of actively licensed N.C. attorneys. The attorneys rated in six categories; listed in these pages is the overall performance rating, on a scale of zero to 5. The chart below also includes that percentage of respondents rating the candidate’s “integrity and fairness” as “poor.” It’s easy to imagine, all other things being equal, that a citizen appearing before a judge would want those “poor” ratings on integrity and fairness to be as close to zero as possible.

Below is a list of all persons on the District Court ballot, including those facing no opposition. They are listed in alphabetical order; the data for competitors is available on those pages for easier direct comparison. The overall performance rating is listed for each, as well as the number of attorneys responding with information about the candidate. The level of participation in the survey varies widely and as you might imagine, sitting judges are better known by attorneys than some of the lawyers offering themselves for election.

The following candidates, who are incumbent judges, are on the November ballot but are unopposed. None of these judges appeared at the Forum on Oct. 16:
Judge Kimberly Best
Judge Ronald L. Chapman
Judge Karen Eady-Williams
Judge Christy Townley Mann
Judge Elizabeth Thornton Trosch
Judge Louis A. Trosch Jr.

The pairings on the ballot

There are six pairings on the November ballot. Below are links to each of those pairings. Eight of the 12 people involved appeared at the Oct. 16 Forum. One had already appeared; at least one more is expected before Election Day. As we have material to fill out the pairings we will do so.
Judge Charlotte Brown-Williams vs. Tracy Hanna Hewett
Judge Jena Culler vs. Grant Smithson
Judge Ty Hands vs. Jeff Thompson
Judge Donnie Hoover vs. Alyson G. Traw
Gary Henderson vs. Roy H. Wiggins
David Strickland vs. Kary Church Watson 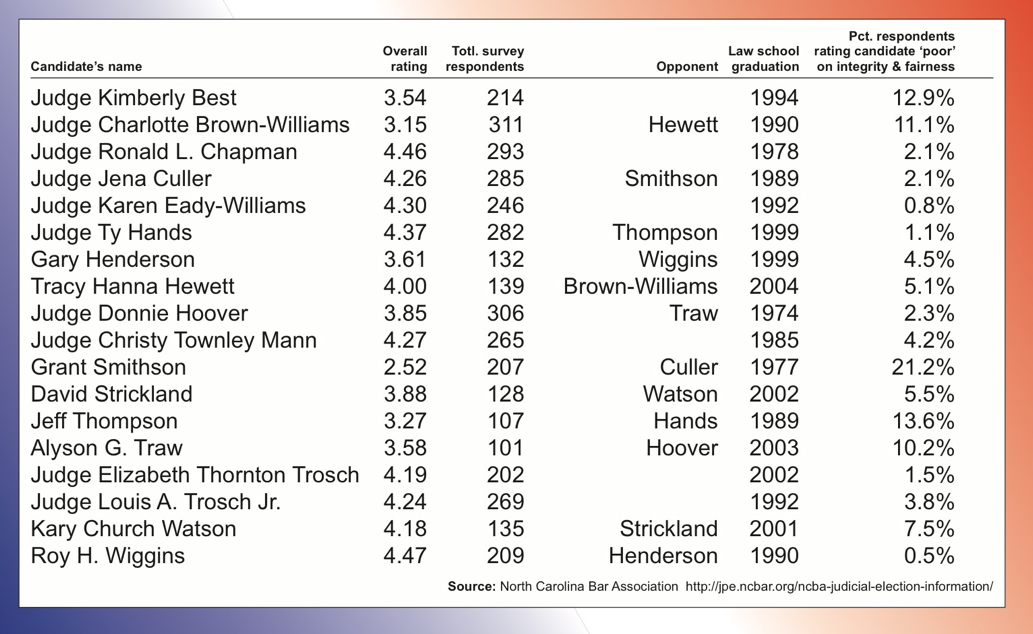