Tracking the ongoing impact of systemic racism can be as easy as looking down at your feet. 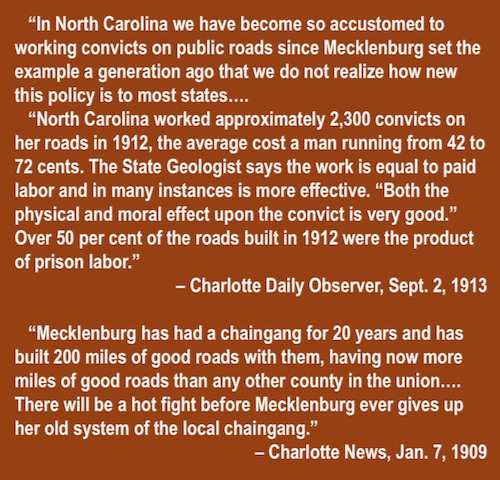 The early roads and railroads of Mecklenburg County were built by prison labor, with prison terms falling chiefly on the formerly enslaved who could not pay fines and ended up in post-Emancipation servitude.

Black communities adjacent to Mecklenburg towns were denied annexation so their white neighbors would not have to pay taxes to extend sewer lines to serve those communities.

The county’s resistance to school desegregation is better known.

A report released today recounts some of the history of disenfranchisement, denial of services, abuse and complacency with residential segregation that have shaped the community’s history. The report was written by staff of the Charlotte-Mecklenburg Library’s Robinson-Spangler Carolina Room at the request of County Commissioneers Laura Meier and Mark Jarrell. The Charlotte Observer wrote about the project.

The Coalition for Truth and Reconciliation, released the library staff’s report, and called on the city to create a similar report on systemic racism that shaped today’s city government. More on the Coalition is here.

In the closing section, the authors note: “We do not view this report as a full accounting of the racism experienced by individual members of the Mecklenburg County community over the nearly 130 years that this report covers. It is, hopefully, a valuable starting point for additional questions to be asked of how we have arrived at our current situation and how we can move forward in more inclusive and equitable ways.”