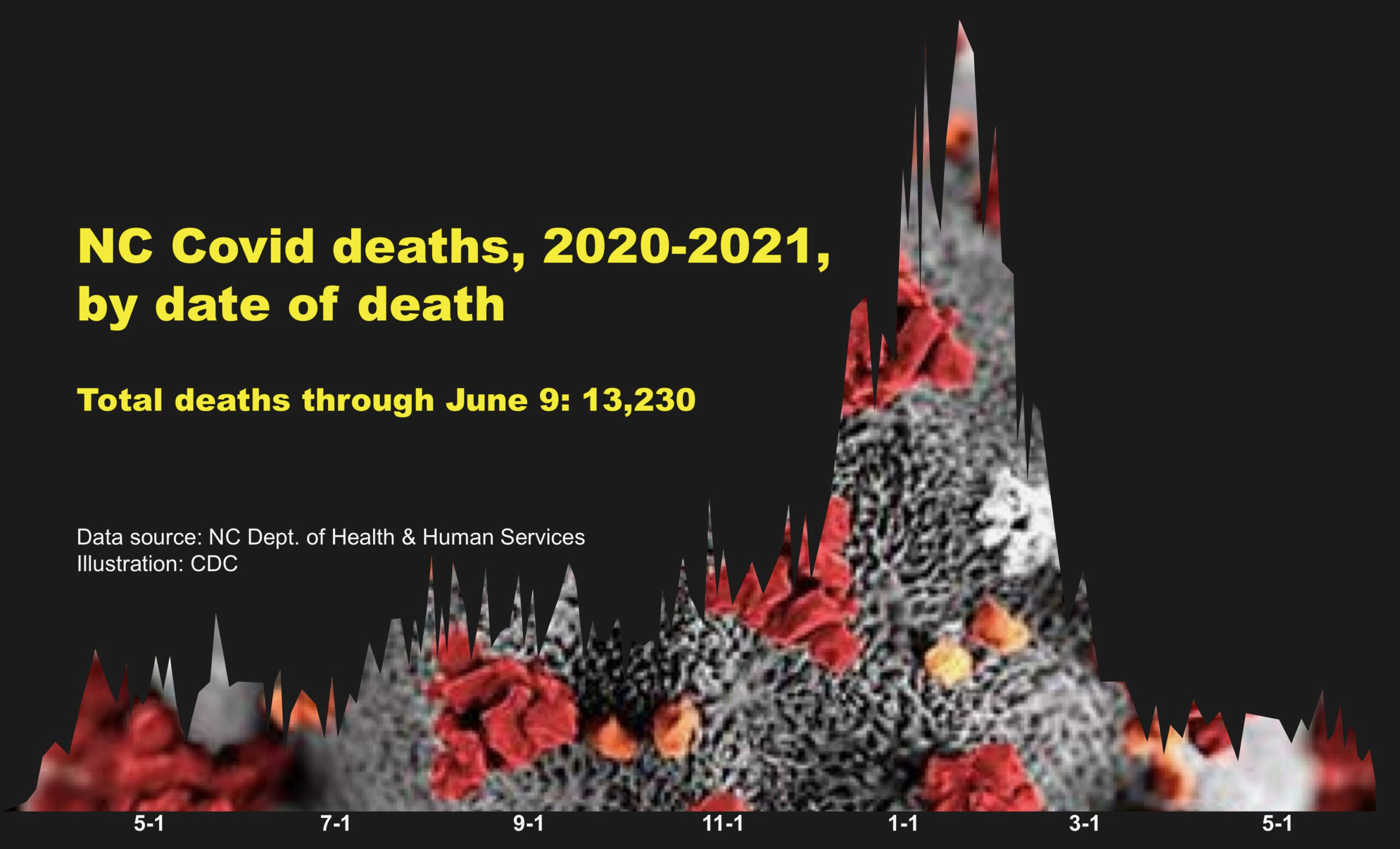 To say that Tuesday Forum facilitators have been protective of everyone’s health in the age of Covid-19 might be an understatement.

And while the City of Charlotte’s policies on use of its facilities may ultimately control the timing of the Forum’s return to the Belmont Center for in-person meetings, there has been no effort to set up shop elsewhere.

Except, of course, virtually.

What follows is a summary of where the Forum finds itself in early June 2021, and where it might be headed as the pandemic eases and the prospects for in-person meetings rises.

The first publicized Covid death at Kirkland’s Life Care Center near Seattle occurred Feb. 26. New York’s first Covid death was confirmed in early March, and within weeks there were more than 23,000 cases in the city and hundreds of deaths. People nationwide began to take in the enomity of the danger from neighborhood “hot spots.”

WBTV reported March 17 that the city and county were closing most government buildings as of March 18. And in a March 17 conference call, facilitators discussed but rejected ideas to gather a presenter and a small group to continue livestreaming meetings. The shutdown of the Forum’s in-person meetings was complete, and the governor’s order put the entire state in lockdown through late April.

Some organizations quickly retooled for virtual meetings. MeckMin announced in early April that it would morph a May breakfast into a Facebook Live meeting. U.S. Rep. Alma Adams put her annual Women’s Symposium on to Zoom on April 16. The Forum waited.

Why? Health, of course. Shock. Fear. But also, perhaps, because, as one meeting greeter often told first-time visitors at the Belmont Center before lockdown, what happened before and after the Forum presentation (i.e., face-to-face networking) was sometimes the most important part of the organization’s community-building work.

In the graphic atop this page you can find the tracings from February 2021, and see that the statewide death rate was plummeting in February. Older residents were receiving vaccinations. Facilitators met by phone and agreed to try virtual meetings. The first of four “dry runs” was March 3. The next three featured the mayor, the county board chair, a City Council member, the superintendent and the school board chair. Each week, attendance grew. After a private virtual meeting March 30, facilitators agreed to go “full speed ahead” into the virtual format. The weekly meetings resumed virtually on April 13.

In February, facilitators chose to bypass Zoom and use Webex, another of the software tools made ubiquitous during the pandemic. Some had used Webex in business environments, where it has been in use for years. The city used it. And its reputation for tighter security was a key attraction. No one wanted virtual Forum meetings shut down by intruders.

Unbeknownst to the Forum, the City of Charlotte used time during the pandemic to ramp up its Cisco Webex resources to do virtual meetings and trainings for city staff. Conference rooms all across the city were retrofitted. The Belmont Center, too, was to be outfitted with cameras, microphones, sound-deadening wall panels and the computer gear required to make it all operate.

City officials told the Forum that they wanted the Forum to use the equipment when the Forum could return to in-person meetings. This would be the second time that the Forum served as a guinea pig: Its arrival in January 2016 at Belmont Center, and its weekly livestreaming, showed other community groups that they could hold meetings in the space; use of the facility grew, which was part of the city’s objectives for the building.

The pandemic experience, with its endless virtual schooling and virtual working and streamed entertainment, has arguably raised the expectations of any American audience for quality video. The days of a single, small camcorder – as was in use by the Forum since 2012 and swung around Belmont Center meetings to focus on a speaker – would best be over. The Forum would use the city’s Webex equipment, thereby creating a higher-quality experience for the Forum’s website and for any livestream viewers, and raising the reliability of the livestream.

As of June 13, several questions remain to be answered as Forum leadership maps out its plans for a return to in-person meetings:

July update: At a July 6 meeting, facilitators reported that a tentative date of Sept. 17 has been set for re-opening of the Belmont Center to public groups. If the date holds, the first in-person Forum would be Tuesday, Sept. 21.

City officials were also reported as considering opening sometime in August. But with the virulent Delta variant of COVID-19 gaining strength nationally, a date for reopening could also fall back into the late fall.

During discussion, there was also support among facilitators for ending public access to the virtual Webex room once in-person Forums begin. But Forum regulars clearly fall into two groups: those wanting to get out and mingle, and those with health concerns who may want to avoid in-person meetings. For the latter group, Forum meetings, at the minumum, will continue to be livestreamed to Facebook and the Forum’s website once the Belmont Center reopens.

Those unable to watch the Forum in real time already can, in advance of the meeting time, e-mail in questions for the presenter. When in-person meetings begin, a way for viewers of the livestream to ask questions will be developed.

September update: There are no official updates, but Sept. 17 will likely come and go without Belmont Center being open. Recently the building was closed for cleaning because of a COVID-19 outbreak among staff.

Further updates will be published as warranted by events. If you have questions, please e-mail us.