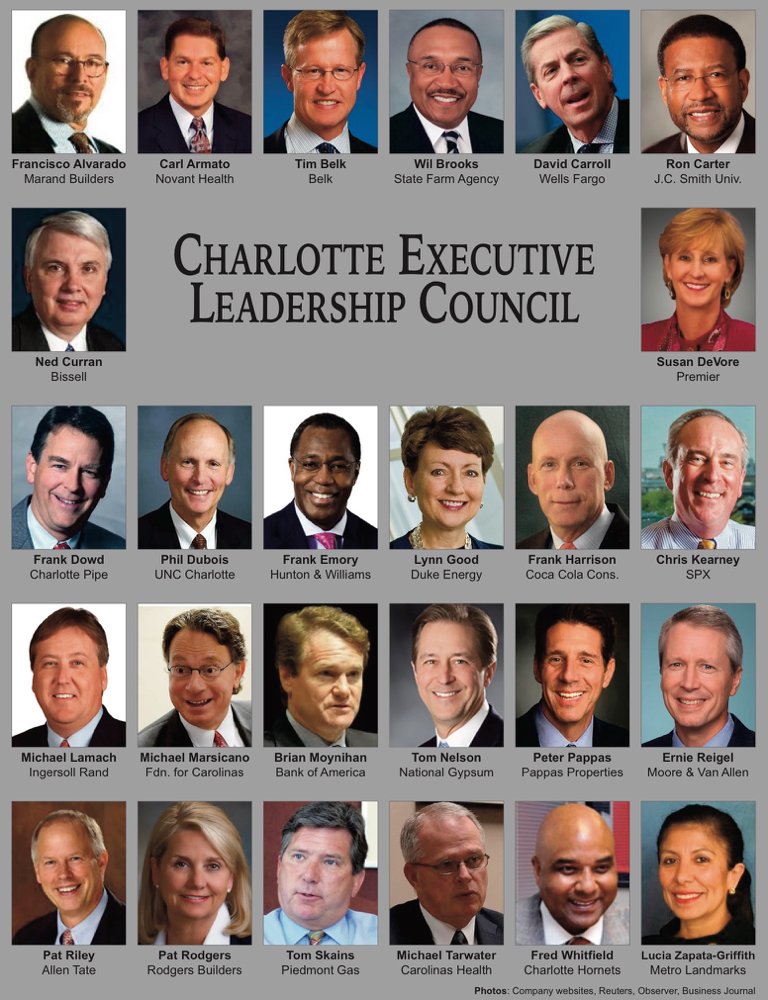 The self-appointed Charlotte Executive Leadership Council announced today is a bigger, more wide-ranging and more diverse group than The Group of white men who, during the 1970s and 1980s, helped shape the city to their liking.

But there are lots of parallels for those who wish to worry – self-appointment, secrecy of discussion, opacity of agenda and lack of accountability.

But the new group promises some public notification of its work. At this point, the group has no staff beyond the considerable resources of its members’ organizations.

The first-day media coverage of this group included news stories by the Observer, the Charlotte Business Journal; and a commentary column by the Observer’s Taylor Batten.

The text of the two news  stories is below.

A new group of the city’s most prominent chief executives has formed a leadership council to tackle issues such as economic mobility and education, and fill what some have called a vacuum left by titans of local industry who retired or companies that moved away.

The group harks back to an earlier era in Charlotte, when an informal network of powerful executives known as “The Group” promoted civic initiatives such as forming the Arts & Science Council and funding the city’s uptown transportation center. But Good said this group will be more open, more inclusive and reach out to a broader cross-section of the community.

“There are members of the community who remember when it was a handful of people who really drove the business engagement issues,” Good told the Observer on Thursday. “We can’t recreate it with two or three people, given how the city’s changed”

Still, the group will retain some confidentiality: Meetings won’t be open to the public. Good said that’s to give council members the ability to discuss issues candidly.

Independent from the Charlotte Chamber and elected bodies, the group will set its own agenda and decide what issues to promote. The new council could wield considerable influence in Charlotte, with executives of the region’s biggest employers and most powerful companies delving into issues such as education and transportation.

The group has met twice so far, and is still learning about issues and deciding where to focus, its leaders said. For now, the group has no budget or expenses, and is receiving administrative and program support from the nonprofit Foundation for the Carolinas.

The new executive council intends to help fill the gap left by leaders such as former Bank of America CEO Hugh McColl Jr., a generation that helped mold modern Charlotte.

“We heard it from a variety of areas: Where is the business community? Where’s the voice, where’s the leadership in the community?” Good said.

The push to start such a group gained momentum last year after the Charlotte Chamber’s annual inter-city trip brought local business and elected leaders to Minneapolis. There, they heard about the Itasca Project, a group of about 50 Minneapolis-area CEOs who meet several times a year to discuss and come up with solutions for issues facing the community. They don’t employ any staff, and CEO groups lead the individual initiatives.

The Itasca Project has focused on areas such as finding ways to close transit funding gaps, providing consultant teams to help improve the local school system and closing the socioeconomic gap between white and non-white workers in the region.

Skains said the Charlotte council is still figuring out where to direct its energies.

“We’re getting grounded,” said Skains. “We’re taking stock of what’s already being done so we can ascertain what we needs to focus on.”

The new group is reminiscent of a past collection of Charlotte CEOs, this one known as “The Group” – capitalized for a reason.

The Group referred to leaders of the city’s biggest businesses who met informally throughout the 1980s and 1990s to tackle various civic issues. Made up of such household names in local industry as bank CEOs McColl and Ed Crutchfield, Duke Energy’s Bill Lee, Observer publisher Rolfe Neill and John Belk, department store scion and former Charlotte mayor, members gathered informally and decided what their city needed.

“We’d see something that needed to be done and, hell, we’d do it,” McColl told the Observer in 2009.

Members of The Group pushed various projects that helped define Charlotte, such as abandoning railroad tracks so a convention center could be built, financing a possible NBA franchise, finding land for an NFL stadium and building the uptown transit center. McColl and former Charlotte Mayor Richard Vinroot worked together on that last project, which resulted in a privately funded, $10 million transit center built on a $7 million parcel of city land.

But as Charlotte, and its biggest businesses, grew, some of that local focus was lost. Even though local businesses still contribute to prominent civic initiatives and charities, many of the region’s most prominent local companies have outgrown their regional footprint, or aren’t even around anymore. Belk is exploring selling itself. Family Dollar was sold to Virginia- based Dollar Tree, and Wachovia disappeared years ago, bought by San Francisco-based Wells Fargo. Bank of America CEO Brian Moynihan lives in Boston.

While companies have grown, changed – and in some cases, moved their headquarters – Tarwater said that hasn’t diluted those companies’ commitment to Charlotte. Most of them still employ hundreds or thousands of people locally, such as Wells Fargo, which didn’t move Wachovia’s workers out when it bought the Charlotte bank.

“Those companies are still very invested in this community, and there’s somebody at a very high level in the C-suite of those companies who are interested,” said Tarwater. “They still represent those companies, even though the corporate headquarters may be somewhere else. There’s not really a void in that respect.”

And the city is more racially, culturally and geographically diverse than in decades past, with different communities growing and sprawling from past UNC Charlotte to Ballantyne. Including voices from those different communities – and not just focusing on the narrow wishes of prominent CEOs – will be important to the initiative’s success, the new group said.

“It’s not a handful of leaders driving the business community in Charlotte,” said Skains. “This is designed to tap into that broader leadership in the community.”

The new Charlotte Executive Leadership Council includes some of the area’s most prominent CEOs and business leaders. Here’s the full membership list.

▪ Michael Marsicano, CEO of Foundation for the Carolinas (Administrative and program assistance)

A group of 25 top executives in Charlotte has started a leadership council aimed at tackling and improving issues such as income inequality, transportation and education.

Good has been named head of the Charlotte Executive Leadership Council for an initial two-year term.

While participating in the chamber visit, the CEOs learned about the Itasca Project, a group of business leaders who banded together in 2003 to tackle similar quality-of-life issues in the Twin Cities. Richard Davis, CEO of U.S. Bank in Minneapolis, leads the Itasca Project and advised Good and her co-founders on starting a comparable executive group in Charlotte. (We will, for the moment, skip the separate matter of how a company’s, or a CEO’s, image could help or hurt such campaigns.)

The Minneapolis group includes the mayors of the Twin Cities and the Minnesota governor. In Charlotte, no political leaders will be involved.

“The council believes a private sector leadership group is preferable at this time,” an outline of the group’s formation states. “The private sector has not had a forum for such discussions, creating a gap in our community.”

Consider this: Those glory days recalled by long-term Charlotte residents about the small group of CEOs who propelled the Queen City into spending public and private money on professional sports, museums and a range of education and transportation projects are, and have been, gone for many years. Duke’s Bill Lee left in 1994, followed three years later by Rolfe Neill ( The Charlotte Observer) and then bankers Ed Crutchfield (First Union, 2000) and Hugh McColl Jr. (Bank of America) in 2001.

“I think as we began to study the idea of coming together, we saw great success from other communities, like Minneapolis and other urban areas,” Good told me Thursday. “At this stage, I’d say we’re in the study phase. … We’ve looked at the economic health of the community. We’ve looked at issues around upward mobility. We’ve talked about education. And we would expect that study and learning to continue for a period of time and our voice will be heard when we think it’s appropriate to weigh in.”

Michael Marsicano, head of Foundation For The Carolinas, is helping shape the focus areas for the council and providing administrative assistance. For the moment, Good and her co-founders and the rest of the CEOs enlisted have no budget, no expenses and no employees. In addition to seeking advice from Minneapolis’ Itasca Project, the new leadership group tapped The Lee Institute to study and analyze similar organizations in other cities for more examples of what might work in Charlotte.

In the coming months, the leadership council expects to get a firmer grasp on what issues it will take on — and which ones it won’t. During an interview Thursday morning in a 48th-floor conference room at Duke Energy’s headquarters uptown, Good, Skains and Tarwater said several times they want to be judicious in what they pursue and make certain they aren’t duplicating the efforts of other organizations.

Eventually, they expect to need some funding for research, working with other civic groups and steering projects. Itasca Project in Minneapolis has no paid employees, no public-relations team and no offices, instead relying on a virtual model supported by voluntary donations from the participating CEOs’ companies.

“Having principals at the table — principals whose time is precious and who are accustomed not only to making decisions but also to seeing tangible results — ensures our relevance and focuses our attention on what really matters,” Davis, the U.S. Bank executive, wrote in a case study of Itasca co-authored by his predecessors, Mary Brainerd and Jim Campbell. “We all know that the work we do must be worth our time.”

The co-founders said diversity in gender, race, ethnicity and company size all factored into the composition of the council. Top executives were enlisted to ensure influence and quick decision-making. The co-founders were also insistent that university leaders be included because of the increasing importance of higher education in all economies.

“This is designed to be representative of the current state of the Charlotte economy,” said Skains, the Piedmont Natural Gas CEO. “There’s a lot of interest and excitement and passion about participating.”

The three CEOs declined to name specific issues they will tackle, but they said any important matters lacking a voice, or needing additional voices, would be fair game.

Asked about some of the largest hurdles faced by the executive leadership council, Tarwater had an immediate answer.

“Scheduling,” he said. “That is our biggest challenge, to be sure.”