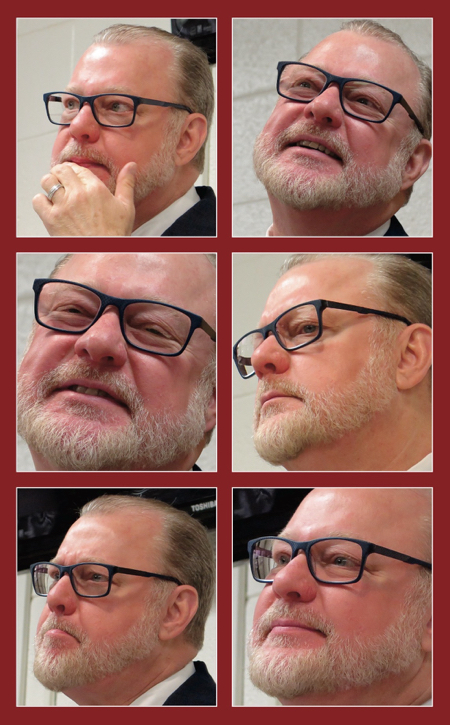 Ron Carlee, Charlotte’s city manager, talked about the issues facing the city and the reasons why he went into city administration.

The presentation came after a Monday evening meeting during which Charlotte City Council approved a proposal to immediately purchase enough body cameras for all police officers. Carlee joked at one point that he was glad that the council members at the Forum had not grilled him, but acknowledged that they certainly had Monday before unanimously approving the cameras proposal.

Carlee was asked about poverty, about racial profiling, about disparities, about how low-income westside neighborhoods could rise on the Google Fiber tide, about how young people can be public servants. His answers bespoke of openness – to diverse views, to citizen participation, to learning more.

He argued for what he described as his “more is more” philosophy – that the thriving of Ballantyne is good for all areas of the city, not a zero-sum game of taking from other areas of the city.

And he also argued for citizen participation, saying at one point that the Gold LIne streetcar project was approved because citizens of the affected areas showed up at Council meetings to voice their support.

Below in five parts is substantially all of Carlee’s presentation and the extensive Q&A that followed.

Q: Rep. Rodney Moore is working on a racial profiling bill. The mayor says he wants the same thing for Charlotte. How is that going?

Q: Re disparities: What did you expect when Council became majority black, and has any progress been made toward closing disparities?

Q: Cameras are OK. But that alone won’t prevent police from becoming the bad guys. What else do we need to do?

Q: How can young people like me, who want to be public servants, get involved?

Q: Will any civil rights ordinance include investigatory powers and subpoena power for the Citizens Review Board?

Q: How will K-12 and college officials be involved in the study looking for ways out of poverty in Mecklenburg?

Q: What impact will Google Fiber’s potential move have on small businesses and minority businesses in Charlotte?

Q: How do east and west Charlotte neighborhoods get equal treatment in this Google transformation?

Q: What’s to keep the NASCAR Hall from running another deficit? And what about filling the building above, that Chiquita is leaving?

Q: Some families spend more on transportation than on either housing or day care. What’s in Charlotte’s future for public transportation?

Q: You advocate speaking out at public meetings. But is there another way for city and county employees who fear retaliation?

Q: Will you consider expanding the study of institutional racism from the police department to other city divisions?

Q: Relations between Charlotte and Mecklenburg’s towns has been bad. Have you been able to unfracture those relationships?

Q: How do afterschool programs fit into the picture being studied by the poverty task force?

Q: The courts wanted more money for Race Matters discussion but my fellow commissioners wouldn’t approve the money. Will you advocate for that?

Q: The city wastes a lot of money. Do you have anyone looking for where money is wasted?

Q: There was Eastland. Then NASCAR. Then Chiquita. Now it’s GoodSports.

Q: Given your position, that means you are a politician, right? What does that mean you have to do?

Q: Poor people are most affected by utility delinquency fees. Should we be subsidizing other programs on the backs of poor people?