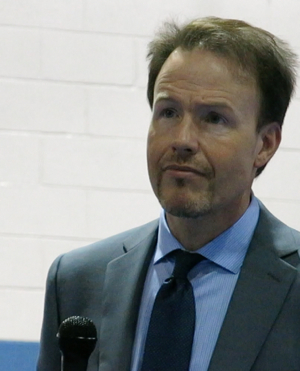 Supt. Heath Morrison returned to the Forum to explain his budget proposal and to ask his listeners to call legislators in whose hands key budget decisions rest. He repeatedly referred to the low wages set by legislators for teachers and other CMS employees. He had memorized not just North Carolina’s low ranking among other states in teacher pay, but also data from studies on the state’s greater “ability to pay” compared to other states who have set teacher pay higher.

And he homed in on decisions made for what he termed the wrong reasons. He recounted the experience of talking with a legislator opposed to the Common Core curriculum standards now being implemented, who Morrison said was opposed not because the standards would not serve students well, but because Barack Obama was in favor of them.

In his presentation and answers to questions, the superintendent made reference to being in Raleigh, and in numerous CMS schools. Two years into his superintendency, he remains on the go. His first day visiting Charlotte after being named superintendent two years began with a Forum visit.

Videos from his presentation and the Q&A that followed are posted below.