CMS is continuing to seek community guidance on school assignment changes that could touch more than a dozen CMS schools, reassign untold hundreds of students, be finalized by the Board of Education in about six weeks and take effect for the 2023-24 schol year.

All this has been brewing while eyes have been diverted by COVID, a war in Ukraine, supply chain snarls and the firing of a superintendent. (And while the media that inundated earlier generations of CMS parents with all the details, has refocused on the latest in entertainment, dining out and pro sports contracts.)

The school board is scheduled to hold a public hearing on the proposals on Aug. 9. Between now and July 31, people who would like to influence the staff proposal that goes to the board can continue to use survey instruments set up months ago. Each survey includes proposals under considerations, with maps showing new boundaries.

Boundary line changes for fall 2023 will affect three groups of elementary schools as CMS prepares to open three new elementary school buildings, one in each area. The unnamed new schools are termed “relief” schools to address overcrowding at the existing elementaries. The three groups, each with its own survey instrument, are:

School board decisions are now planned for Aug. 23, but the process has faced delays in the past. And some of the documents CMS is still using say the new schools would open in the fall of 2022, rather than 2023.

In only one case do the documents provided by CMS list the number of children at an existing school who will be reassigned. That case is the Charlotte East Language Academy (CELA), which in morphing from a partial dual language magnet to a full magnet, might displace half the current students, who would be reassigned to the new elementary on Farm Pond Lane. But even that number is uncertain, as parents at CELA hope that some of the nonmagnet children living in an enlarged walk zone will choose to remain.

In a May 17 Zoom call, Claire Schuch, CMS Director of Planning Services, said that even if the Idlewild boundary changes, students enrolled in the Talent Development and Learning Immersion magnet at Idlewild would remain at Idlewild.

Dr. Schuck also mentioned that Reedy Creek was added to the Hidden Valley proposal when planners became aware of Reedy Creek’s needs. Hidden Valley has been in crisis for some time: Previous additions have given Hidden Valley 39 classrooms, but CMS documents show 28 mobile classrooms also in use at the school.

What’s missing from the material available to the public is a narrative of what planners face, and how they are engaged in moving dominos, er, children, to keep a classroom-strapped system afloat.

A fascinating example is in the Hidden Valley proposal maps where some children move east, some west. Part of the relief at Hidden Valley would be via rerouting to Newell further east the buses picking up children along Tom Hunter Road. Nearly a third of the Newell attendance zone would move east to J.W. Grier. Grier would lose more than half its current attendance area to the new relief school, but would pick up the northwesternmost quarter of Reedy Creek’s current zone, with the southwestern corner of the Reedy Creek zone reassigned to the new school.

As in the past, Dr. Schuck said rising fifth graders would remain at their current school to prevent two moves in two years, one being to middle school.

For now, maps and survey links are on the main CMS Planning Services web page here.

Below are several of the preliminary maps for relocation of boundary lines. On the maps, existing boundary areas are marked in pastel colors, while proposed boundaries are marked in more vivid blue lines. In the South Charlotte proposal, the map below is one of at least four under consideration.

Funds to build the three new schools were approved in a $922 million bond referendum in 2017. The 2023 bond issue that CMS is already talking about came up with Reedy Creek parents, who this spring expressed concern that their school will open in 2023 with little capacity to absorb students from new developments approved or under way in the area. Further relief for Reedy Creek, said Chief Operations Officer Brian Schultz, will ultimately depend on voters’ approval of the next school bond issue.

Forms in English and Spanish are available for comments about the plans. 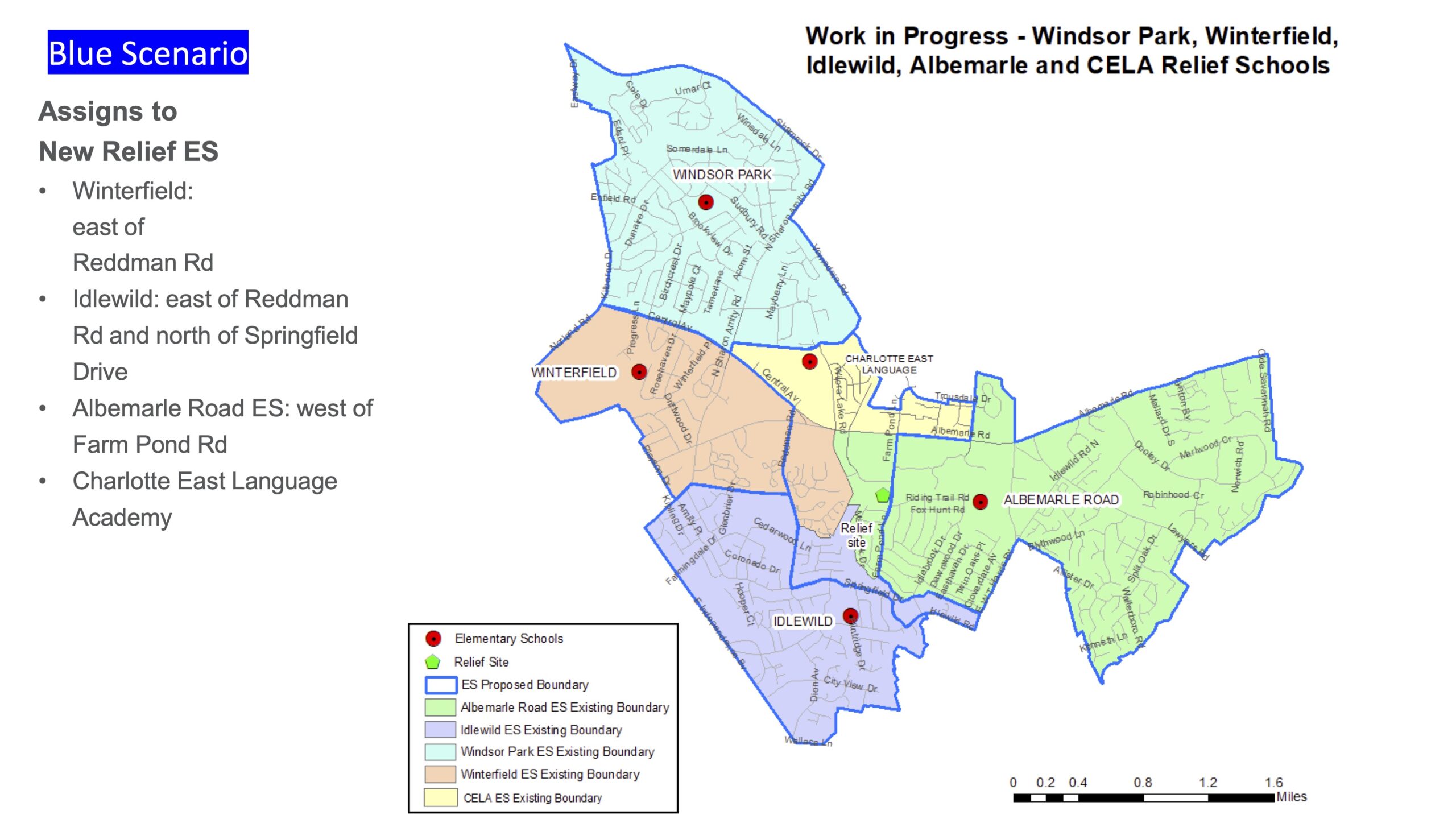 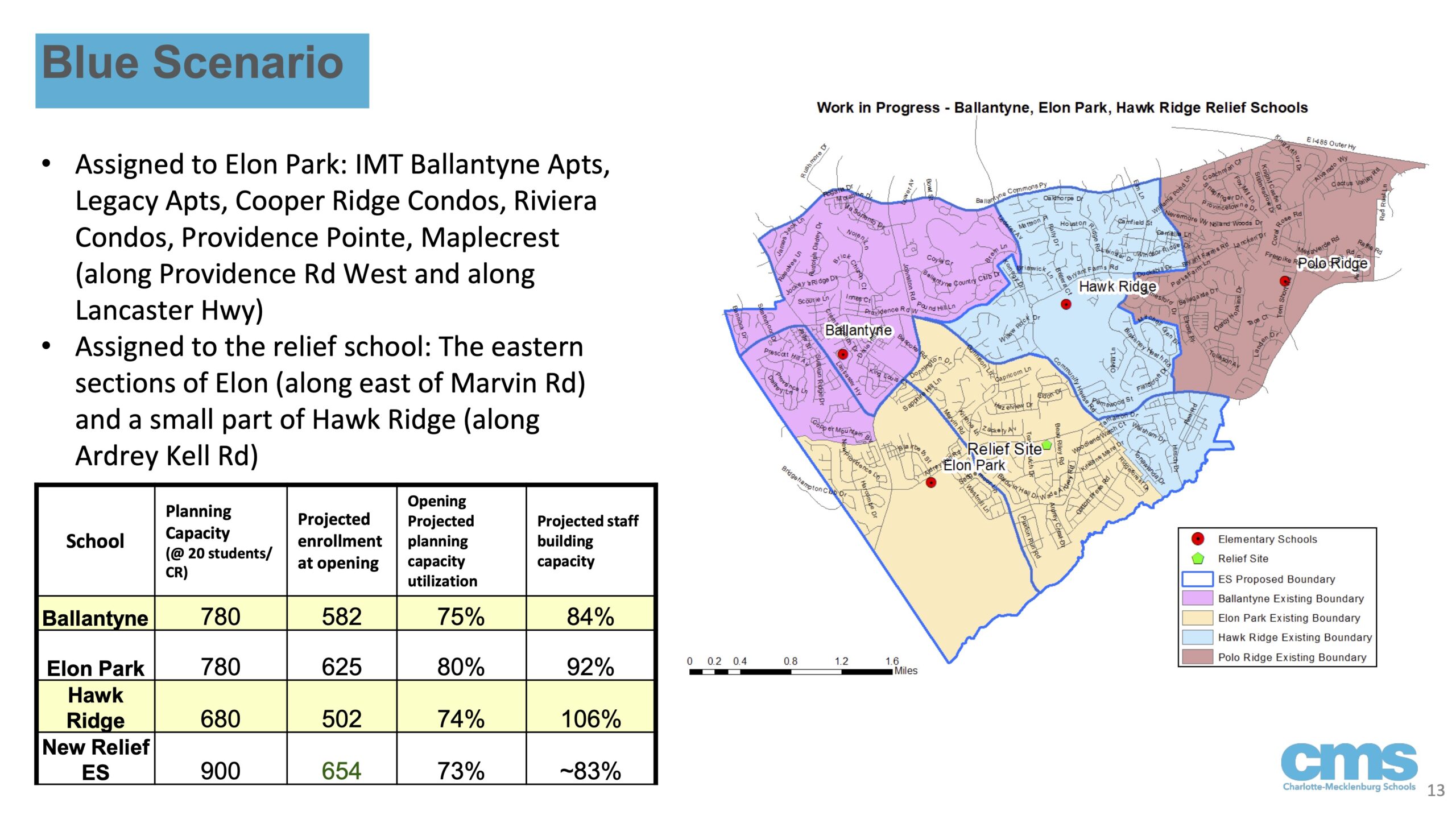