We can stop the crocodile tears. We can stop the convulsion of promises to do better. And recognize that we have slipped into a decades-long downward African American student achievement spiral that needs an immediate reversal.

There’s an old adage in the African American community, “When white folks catch a cold, Black people get the flu.” The most recent student achievement data mimics this saying exactly.

The downward spiral started in 2010, when Supt. Peter Gorman closed several schools located in the Black community. The community was outraged with the merging of several predominately Black K-5 elementary schools with 6-8 middle schools, often without consideration of the negative impact of having middle schoolers learning in a facility built for primary students.

The resulting outrage was short-lived. Soon after this decision, Project Lift was announced with one of its strategic goals to graduate 90% of seniors that were College and Career Ready. Also, there was a promise of $55 million targeted to nine predominately Black schools.

Shortly after the launch of Project Lift, the Chetty Study found that Charlotte ranked 50 out of 50 cities regarding the lack of upward mobility for poor children, mostly Black and Brown. The Chetty Study outraged our local leaders and Leading On Opportunities was born out of this revelation. One of its strategic goals was to increase the College and Career Readiness of African American students. Simultaneously, Supt. Heath Morrision launched The Beacon Schools Initiative at 14 center city schools and focused on improving the academic performance of African American and Hispanic students.

In fact, our third-grade College and Career Readiness reading scores declined across the board and the number of low-performing schools increased from 37 to 42 prior to COVID-19. 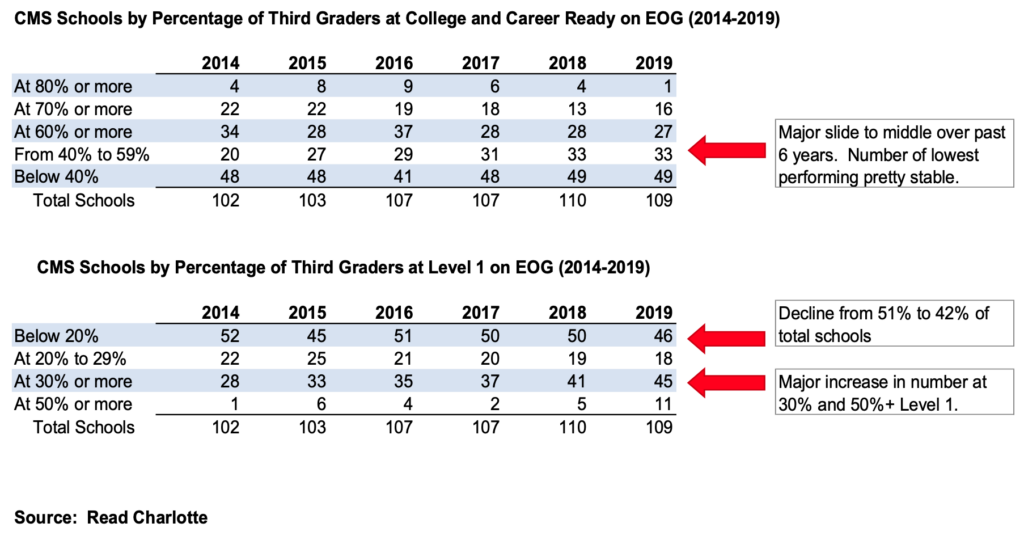 The current rewriting of the 2024 Strategic Plan, coupled with Student Outcomes Focused Governance, offers little hope so far. At a CMS Board of Education Workshop dated April 30, 2021 (1:51 sec.), the Board was asked by its consultant, “What was the total percent of Board time spent on student outcomes (achievement) from January 1, 2021 to April 30, 2021?” Individual board members and the superintendent’s answers ranged from 0% to 5%. Basically, the school board and superintendent admitted spending little to no time focused on student achievement, while at the same time telling the public the exact opposite. (There’s a plan and we are working our plan.)

Here’s the result of the School Board working a non-existent plan. 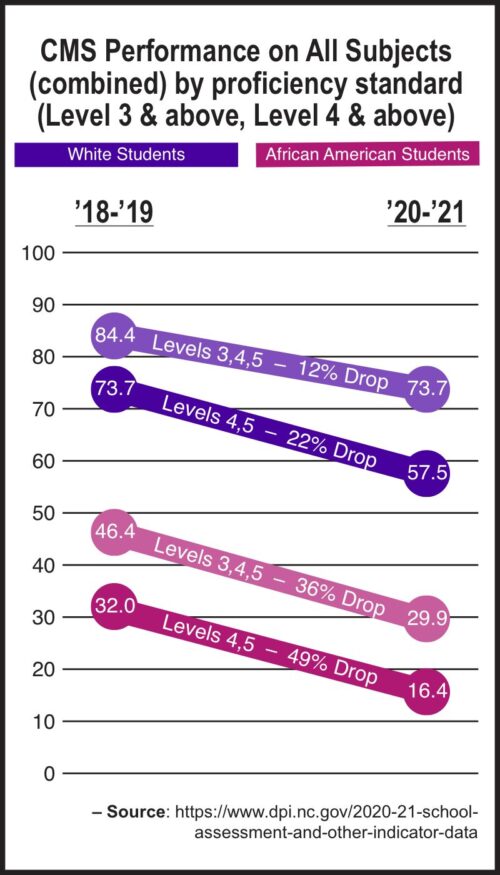