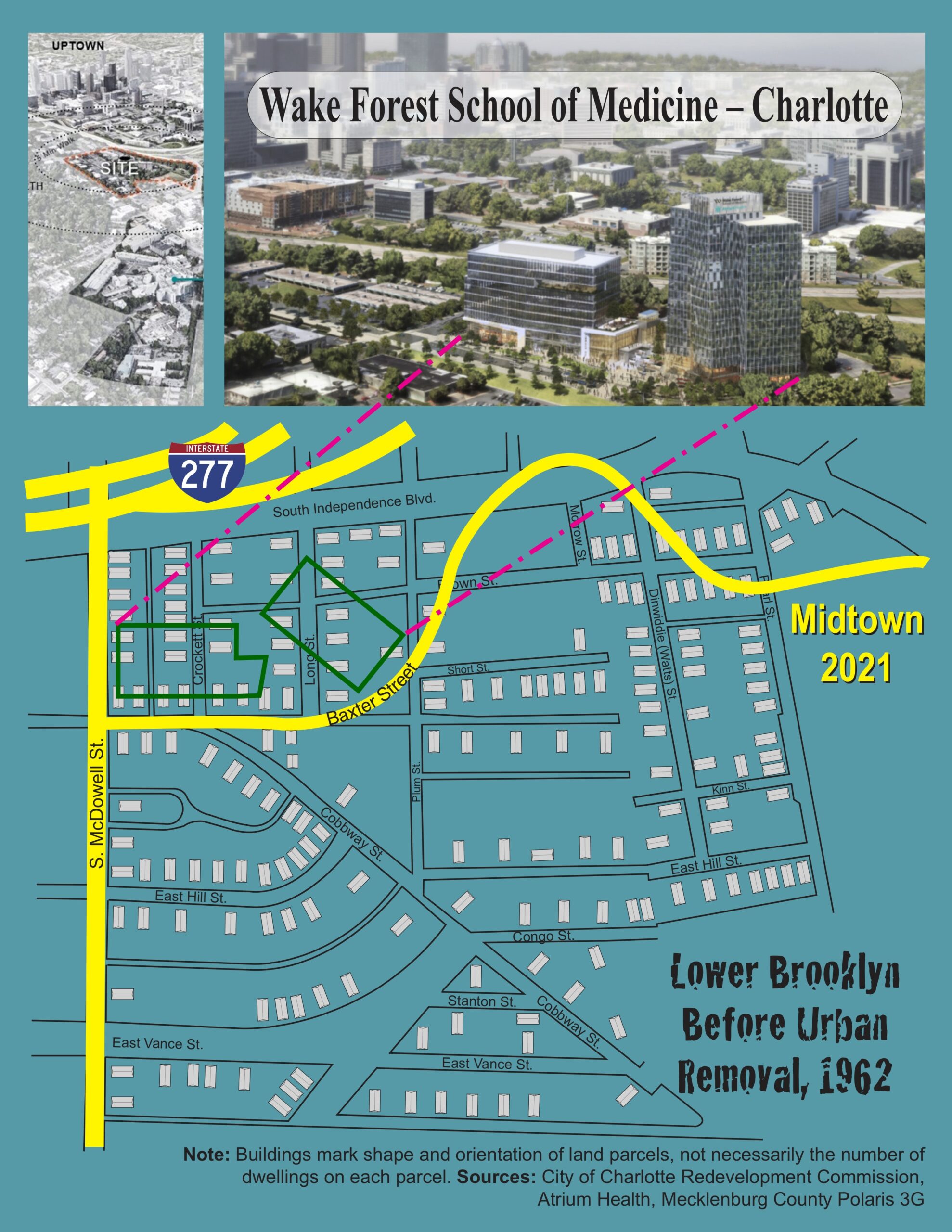 Frank and Hattie Dixon lived at 617 Long St. He was a helper at Tabriz Persian Rugs at 501 E. Trade. St. Robert Roach, a yardman, lived at 620 Long St., across from the Dixons. George and Willie Brown lived at 621. He was an orderly at Presbyterian Hospital.

One block west, between Brown and Boundary Streets, Nathaniel and Mary Steele lived at 621 Crockett St. He worked at Ivey’s Department Store. Leonard Wallace lived next door at 623. Across the street at 624 were Willie and Marshall Stover; Marshall Stover worked in the lab at Barnhardt Manufacturing Co. Cole and Reon Perry were at 631, and Cole Perry was a presser at Miller’s Central Hat Shop at 127 W. Trade St. They lived at the south end of the block, across the street from the Glamour Girl Beauty Salon.

These were among the African-American residents who lived close to one another near uptown Charlotte. If they and their neighbors are still alive, they must be looking now at what’s going on in their old neck of the woods.

By 1962, the Charlotte City Council was approving redevelopment of their Brooklyn neighborhood. Using mostly federal funds, the city forced everyone, residents and businesses, to leave, some with assistance, some without – hence the common reference to “urban removal”. The land was cleared and streets were bulldozed. By 1976, there was an expansive one-story office building on the dirt where an earlier generation had built Crockett and Brown and Long and the homes that hugged the streets. A title company was a tenant of the office building in the early 1980s. Today, the building still stands, but it is now owned by Atrium Health.

It is in this part of the Brooklyn urban renewal area that the towers of Wake Forest School of Medicine-Charlotte will rise in the next few years. The medical school will bring together Winston-Salem’s Wake Forest Baptist Hospital and Charlotte’s Atrium Health. A medical school has long been sought by those who have steered Charlotte’s growth from its cotton trading and railroad hub roots.

By 1963, urban renewal was assured. From pictures taken for the Redevelopment Commission, it would appear that property owners halted exterior repairs of their holdings. Conditions deteriorated and the neighborhood vacancy rate spiked. Yet, Charlotte Memorial Hospital employees continued to live in the neighborhood.

Idella B. Edney, a housekeeping maid, lived on Congo Street.

Ethel Leary, a presser, lived a few doors down from Idella Edney on Congo Street.

Mrs. Eliza Mozell, who worked in the laundry, lived a block away from Mary Hoke on Hill Street.

As early as 1943, according to that year’s city directory, Charlotte Memorial Hospital employees had lived along these streets.

In 20 years, the former residents of Brooklyn and their descendants may not talk about the shiny towers that will by then dominate the old neighborhood. But they may pine for the close-knit community that once sheltered them or their kinfolk as they helped operate the complex human enterprise known as a modern medical facility.