Over the weekend, Charlotte Democratic strategist Sam Spencer shared his explanation for opposing the ballot proposal on a sales tax increase. He had his words below published in a piece in the Charlotte Observer. Separately, he distributed the flier reproduced below.

Throughout Charlotte’s history, we’ve been a crossroads: for indigenous trading paths, then railroads, and now connecting flights. We’re often at the crossroads of history, too: unjust taxation or independence; segregation or integration; and now, inequity or justice. 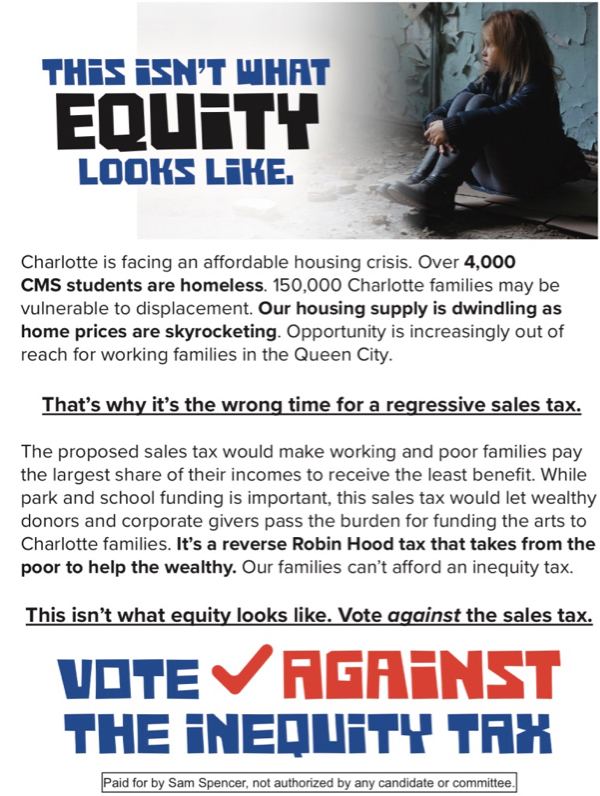 These moments present a choice: be performative, and create a marketing campaign or committee to “address” the issue; or be transformative and do the painful work to create lasting change.

For the past four years we’ve heard about upward mobility in Charlotte, but recently came the announcement that over $275 million in public and private investment would go to address affordable housing in our community.

Mission accomplished, right? Time to move on to other issues?

The Mecklenburg Board of Commissioners thinks so. Even as affordable housing remains a critical issue, they’ve gone to the public with a sales tax that will make it cost more to be poor in Charlotte without addressing systemic poverty and inequity.

To be fair, almost everyone who supports the quarter-cent sales tax is doing it for the right reasons. Equity is a big part of the pitch for the arts, parks, and schools tax. The Arts and Science Council determined that designated public funding was the best way to insure “cultural equity.”

The sales tax proposal comes right before the city considers increasing tourism taxes on hotel stays and rental cars to give a government-funded subsidy to David Tepper, the wealthiest billionaire of all of the NFL team owners.

The pitch for these two taxes is similar: much of the sales tax revenue, and most of the hotel and rental car tax revenue, comes from people who live outside of Charlotte and Mecklenburg County, so they’re good taxes. In spite of promises to the contrary, however, these are not equitable taxes. Regressive taxes ignore the needs of the working poor, the people who stand to contribute the highest percentage of their income.

We have over 4,000 homeless CMS students and 150,000 Charlotte families that may be vulnerable to housing displacement. Transitional housing is limited in Charlotte, so many of these families rely on hotels and will be paying more money to avoid sleeping in their cars (or worse). It’s hard for me to imagine someone saying with a straight face that the Arts and Science Council — or the Panthers — is in greater need than these families.

It’s even harder for me to imagine that these families will see increased access to the arts, parks, or Bank of America Stadium. Artist Jonathan Herrera said: “If it is inaccessible to the poor, it is neither radical nor revolutionary.” I’d add that any policy that asks more from the poor than the wealthy is neither equitable nor transformational.

Charlotte hasn’t fixed housing insecurity or homelessness because it’s hard. It takes time to dismantle inequitable systems. People who desperately need affordable and transitional housing don’t have that many advocates or lobbyists. Success requires years of work and investment.

However, if these taxes pass, the working poor will feel the greatest burden and get the least benefit, and our affordable housing efforts will look like a Potemkin village.

Charlotte is at another crossroads: another performative measure, or sustained transformational hard work to create lasting equity in our community. That’s why I’m voting against the arts tax, and why I hope the Charlotte City Council will think hard about making housing more expensive for our most vulnerable.

Sam Spencer is a Democrat and former presidential elector and DNC delegate for President Obama who has been active in Charlotte politics for almost two decades.