Darrell Gregory returned to the Forum Tuesday with an update on the Juvenile Crime Prevention Council‘s efforts to get more than $1 million in government funding to the groups with a track record of making an impact with at-risk juveniles.

Since his August visit, the Council has completed a round of funding that involved dropping one or more groups that the council determined had not met the goals agreed to in the previous funding cycle. The council began supporting two new groups. It also saw more interest from agencies: Applications for funds went from 8 to 21, he said.

Gregory made his presentation from two pieces of paper: One listed recent grants. The other listed members of the council. He said the 25-member council had five vacancies. 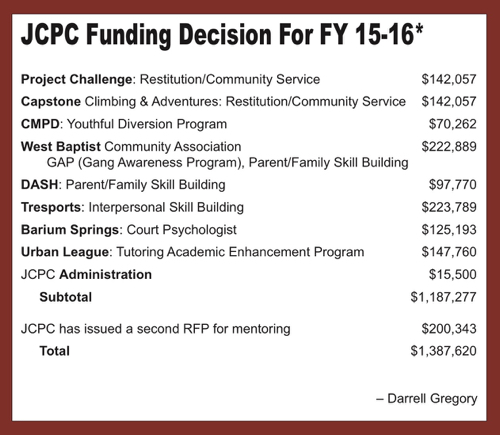 Gregory has been wearing three related hats. He’s been chairman of the Juvenile Crime Prevention Council. He’s youth mentoring program coordinator at the Police Activities League. He told the Forum he resigned last week as chairman of the Mayor’s Mentoring Alliance.

Videos from the presentation and Q&A are posted below.