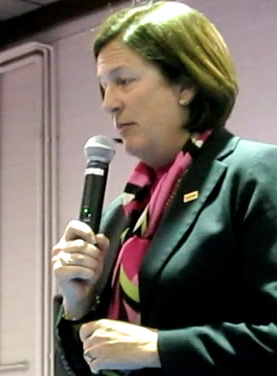 Despite three decades serving the public in Charlotte-Mecklenburg Schools, Ann Clark sought first to explain herself. Fair enough: The North Carolina native is in the limelight as never before, and people are paying attention as never before.

Named superintendent in January, Clark has, not fences to mend, but fences to build, with many parts of the state’s second-largest school district. And she said she didn’t want her story shaped by what people had heard from others, or what they merely presumed.

“I come at it believing in every kid,” Clark said. “My lens is ever kid, one child at a time. Not every male or female student. Not by race – big aggregate numbers.”

The belief that every child can learn harkens back to her experience with her late older brother, a person she said she saw learn more than anyone expected, given his profound handicaps. She also has strong and possibly divisive views on which jobs are most important in a school district.

“So while you might have expected me to say the most important job in this district is the classroom teacher, and at the end of the day that is the person that makes the greatest difference for our kids, but I believe it all hinges on a principal.”

And in front of a community group that often calls to account those who talk about diversity but fail to implement it, Clark was clear about what is uppermost in her mind when making the key hires.

“What I am looking for most is a match, a match of a principal and a school…. I’m looking for something that is very hard to quantify, but I believe that 32 years have taught me how to tease it out, and that’s something called belief….

“So what the heck does she mean by belief? I mean belief in the potential of every kid.”

Combining that with more quantifiable evidence on the achievement results and culture of the places where a candidate has earlier served, allows her, Clark said, to estimate “how they’re going to execute their belief and translate that into student achievement results.”

Early in her presentation, Clark talked about growing up in a household whose stories included the work of her grandfather, who created his southwest Virginia community’s first schoolhouse, and her grandmother, who essentially ran a one-room schoolhouse.

In her world growing up, Clark said, educators were revered. Late in her presentation she admonished audience members to teach their children to value the profession, and encourage them to join it.

Which rolls back to her belief that successful schools are all about a “great principal, able to hire great teachers. Doesn’t matter where that school is located….”

During the Q&A that followed her presentation, Clark faced a question not from a beloved 20th-century era but from the current era in which the quality of education is directly tied to where schools are located. The question was: Why is band no longer available at every middle school?

Clark’s answer was supportive of the value of every child learning, but quite cognizant of the horrific choices CMS is forcing principals to make in an era when public officials keep money tight, schools don’t have the resources they need, and the state may not even cover the higher costs of a growing enrollment.

The session prompted news coverage by WBTV and the Observer and a videographer from Time Warner Cable News.

Q: Congratulations, and we all want to be optimistic. But we really haven’t always delivered on what we promised.

Q: Where are you seeing early successes in teacher recruitment?

Q: The earlier questions about diversity were not about principals and teachers, but at the executive level.

Q: Can we get to a point where Title 1 school principal hires aren’t newbies that have to learn on the job?

Q: Your first 2 hires were white women. What plans do you have to include black and Latino women in the top ranks of CMS?

Q: Are you willing to add more about African-American history and culture to the curriculum?

Q: Will CMS get Google Fiber? Who is the point person?

Q: What are you doing to increase the number of male teachers and male principals?

Q: Are there strategies in place to meet the specific needs of young black males?

Q: Of the 85% who graduate, how many were truly college- or job-ready?

Q: Are you still committed to making literacy the North Star of district reform?

Q: Many Title 1 K-8s don’t have band, but the affluent middle schools all do. And what about elementaries that have no media specialist?

Q: Kids are assigned to school. How can you deny them band? And the key to achievement is experienced teachers and Board certified teachers in each schoolhouse. Do we even track that info anymore?

This morning I came across an article that was akin to Dr. Foluke’s textbook inquiry on the importance of cultural knowledge.  A portion of the article is below. One of the textbooks mentioned in the document is one of North Carolina’s DPI approved textbooks for high school students, but it is not one used by CMS.

Although I agree with Dr. Foluke on the importance of cultural learning impacting students’ social development, this is not a black-white issue but an institutionalized, systematic environmental one of social inequity premised on race as the justifier and scapegoat. And not just race: All marginalized families, unemployed and underemployed, regardless of national origin, race, etc. are victims of social inequity.

As I wrote in my May 2013 EL article, we cannot narrow the achievement gap to any significant extent in segregated schools. And we cannot desegregate schools unless we desegregate neighborhoods.

Education policy is civil rights policy. But we will never develop the support needed to enact aggressive policies of metropolitan housing desegregation if educators and policymakers remain unaware of the role of government-sponsored residential segregation in every region of the United States. And we are not doing the job of explaining these realities to young people so that they will support more integration-friendly policies in the future.

Elementary and secondary school curriculums typically ignore – or worse, misrepresent – this story. For example, in more than 1,200 pages of McDougal Littell’s widely used high school textbook The Americans, a single paragraph is devoted to 20th century discrimination in the North. It devotes one passive-voice sentence to residential segregation, stating that “African Americans found themselves forced into segregated neighborhoods,” with no explanation of how public policy was responsible.

Another widely used textbook, Prentice Hall’s United States History, also attributes segregation to mysterious forces: “In the North, too, African Americans faced segregation and discrimination. Even where there were no explicit laws, de facto segregation, or segregation by unwritten custom or tradition, was a fact of life. African Americans in the North were denied housing in many neighborhoods.”

History Alive!, a popular textbook published by the Teachers Curriculum Institute, portrays segregation as mostly a Southern problem (“Even New Deal agencies practiced racial segregation, especially in the South”), failing to make any reference to the New Deal’s embrace of residential segregation in every region of the United States.

Avoidance of our racial history in the United States is pervasive. And by failing to give our students the facts, we are ensuring that this avoidance will persist for subsequent generations. Only by relearning and remembering this history can we understand that desegregating metropolitan areas like St. Louis is not only desirable, but a constitutional obligation and an essential first step toward a truly civil society.