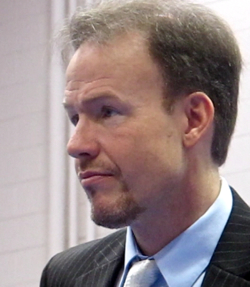 A bit more than a year after his first visit at the Forum, CMS Supt. Heath Morrison spent his 20-minute introductory remarks recounting his first year, as if his audience had not been paying attention.

He didn’t get fired up until well into a Q&A session when he was asked to make a pedagogical case for the K-8 school consolidations on the westside that he inherited from Peter Gorman, who included the consolidations as part of a expense-cutting plan during the recession.

The video below begins with his answer to that question, then includes the remainder of the Q&A, held in the less-than-intimate setting of the West Charlotte Recreation Center gymnasium.