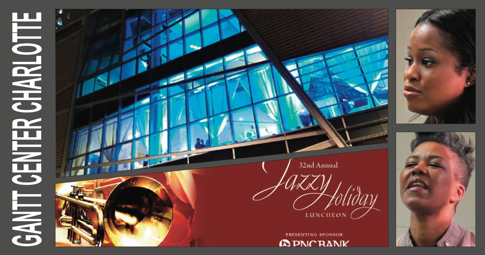 They came for a five-minute announcement, and stayed for the full Forum to answer questions. They came with a message. They took many back with them.

Their message was about the upcoming 32nd Annual Jazzy Holiday Luncheon on Friday, Nov. 30 at 11:30 a.m. at the Westin Charlotte Hotel. The event is a fund-raiser for the Gantt Center, which was founded in 1974 as the Afro-American Cultural Center and was renamed to honor Charlotte’s first African-American mayor when it moved to uptown Charlotte in 2009.

Forum participants included several with first-hand knowledge of the center’s founding and early years, and they peppered the Gantt Center staffers with questions.

The two videos below capture most of the introductory comments and the Q&A that followed. A participant comment about Charlotte’s troubled history closed the session, and the second video ends with an attempt to explain the pain, loss, hurt and injustice still felt today by African-Americans who lived that history.

The Gantt staffers shared two items with the Forum: A flier about the Jazzy Holiday Luncheon, and a press release about it.