Before March 2020, things were different. Here is a duplicate of the About Us page content from that time.

Pull up a chair and join the community discussion

A hearty welcome to visitors and newcomers. The Forum shares with all present “information of importance to the African American community in particular and the rest of Charlotte in general.” Come in, have a cup of coffee and make yourself comfortable. Look around. Among those around you on any given day will be wage earners and business owners; civic activists and nonprofit executives; and a variety elected officials of this community—judges and members of Charlotte City Council, the county commission, school board and state legislature.

Coffee, regular and decaf, is offered free at all Forums. Nothing is for sale. Donations are accepted toward the cost of buying the coffee and supplies.

The Herron Coffee Fund tracks all monies voluntarily left at the coffee pot, the expenses of buying coffee and supplies, and the donations of all excess funds.

The Breakfast Page acknowledges those who have agreed to donate breakfast foods on a regular basis. Individuals and companies bringing in food are not paid and do not share in the proceeds from the coffee fund.

Here are the Forum’s “operating agreements.” The Forum has settled on these rules after years of discussing controversial and emotionallly charged issues. The text:

The Tuesday Morning Breakfast Forum provides an opportunity for all in attendance to learn information of importance to the African American community in particular and the rest of Charlotte in general. In order for the Forum to operate as smoothly and effectively as possible, it is asked that all attendees adhere, at the very least, to the following rules of conduct:

All meetings are public, and are recorded

The Forum is a public meeting held in a public place, and is open to all. Members of the media are welcome, and television crews are accommodated as best as the space will allow.

Forum meetings have been videotaped since 2011. Those videos are available in this website’s Archive and are stored at YouTube.

In October 2015 the Forum began experimenting with live streaming of the meetings to open the content of the discussion to many people whose commitments make it impossible to attend an 8:30 a.m. meeting. Live streams become a videotape of the meeting, which is also stored at YouTube and may be viewed later.

On Tuesday mornings when equipment and Internet and the stars are all aligned and a live stream begins, a clickable link like the image at right is inserted on the top left corner of the front of this website, then removed sometime after the meeting. 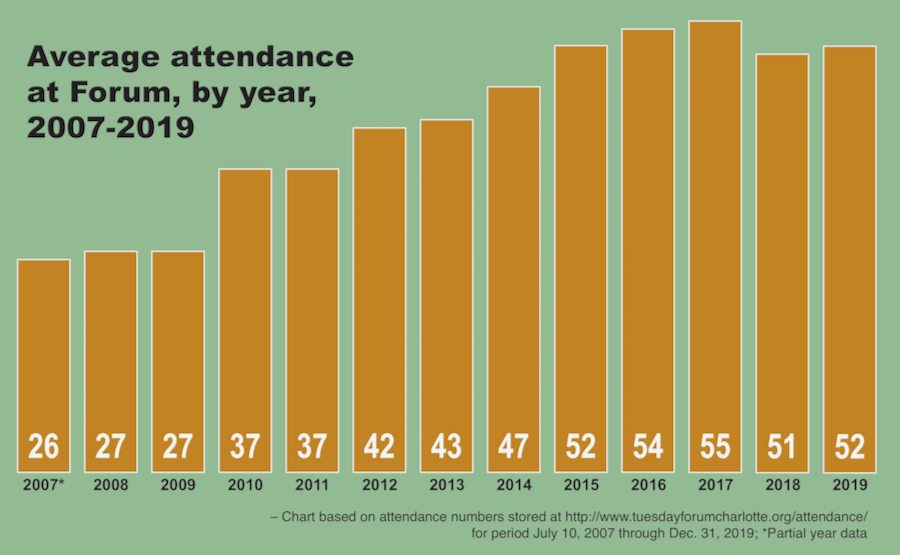 Since July 2007, the Forum has kept track of attendance, initially for the Mecklenburg Parks & Recreation Department. Those records are here.

A bit of history

The following Oct. 14, 2005 excerpt from a column by Charlotte Business Journal writer David Mildenberg will give readers a sense of the Forum. The column was headlined: “A get-with-it response to apathy: For decades, Sarah Stevenson has set the standard for public discourse.”

“The declining interest in local and state affairs, reflected in low voter turnout and reduced membership in civic groups, is disappointing…. Fortunately, Sarah Stevenson is among those who have bucked those trends in Charlotte for 25 years — for which she deserves praise.

“In 1980, she and now-deceased Mecklenburg County Commissioners Bob Walton and Phillip Berry started the Tuesday Morning Breakfast Forum at the old YWCA on Trade Street.

It was an outgrowth of the Black Political Caucus…. Now meeting at a recreation center next to West Charlotte High School, it’s a rare sounding board for Charlotte’s African-American community to communicate with the mostly white, southeast Charlotte leadership — and vice versa.

“Speakers and questions are timed precisely to avoid excessive rants. That’s important because the cadre of regular attendees, including Richard McElrath, … [Dr.] Thomas Moore and [Dr.] Gyasi Foluke, do not lack for strong opinions about inequities in Charlotte.

“We want to inform people and let them air their concerns and their complaints to the right folks,” says Stevenson, who moderates the meetings.

Much of the group’s longevity clearly stems from widespread respect for Stevenson’s gracious yet firm style….

“It does seem to be getting harder to keep people interested, and a lot of people are pessimistic,” she says. “But that’s a reason for those of us who are optimistic to try to convert some of those folks. I just feel it is better to be optimistic and just push and work as hard as you can.”

Longtime Forum participant Jackie Edwards Walton says she attended the Forum for the first time in January of 1978, rather than the 1980 referred to in Mildenberg’s story above.

The Charlotte Observer report below makes two points: The Forum was called into being by a letter signed by Phil Berry, Sarah Stevenson and the Rev. George Battle (The article does not mention the date); and the Forum’s first meeting was held at the YWCA, 418 E. Trade St., on Dec. 16, 1980.

‘If you really want to know what’s important in this community….’

Longtime Forum participant Martha Alexander served in the N.C. House from 1993 to 2013. Click the video to start it.

‘People can come and learn what the pulse of the community is….’

Sara Spencer served on Charlotte City Council in the 1990s Click the video to start it.

‘We are a democracy’

Raleigh-based Dan Blue III, a 2016 candidate for N.C. Treasurer, rose on Oct. 18 to call for an citizenry informed about issues facing their communities by going “directly to the source to get better information. We can’t strictly focus on what the televisions are telling us. We need to be active and talk to our neighbors, talk to other people producing other information, and hash it out. If we have those conversations, I feel pretty strongly that we’re going to find the answers, whether the parties are leading us this way or that way – in the end we are going to find a way to move forward.”

Ruth Sloane wrote the chapter “Breakfast with Sarah: A History of the Tuesday Morning Breakfast Forum” in the 2014 anthology, “Let There Be Light: Exploring How Charlotte’s Historic West End is Shaping a New South,” published by Johnson C. Smith University. Excerpts:

“Someone once said that Sarah Stevenson knows how to conduct while allowing people to keep their dignity. As a young woman in my twenties working with her at the Charlotte Mecklenburg Youth Council, I began to understand. I grew to understand she was the type of leader that would put forth an extra effort to praise, encourage and motivate others first. 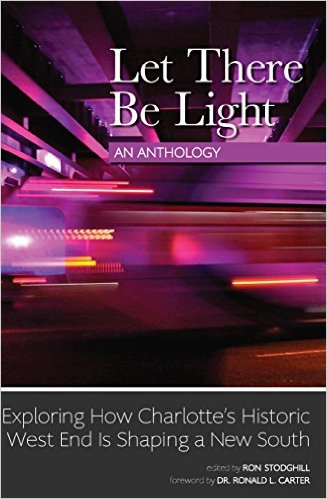 “I also discovered that Sarah is always thinking ahead, and that quality is what led to the Tuesday Morning Breakfast Forum. Back in 1978, Charlotte was taking its first steps toward becoming a world-class city. It had already become known as the “Can-Do City,” and African Americans needed a place to discuss issues of the time.

“This was indeed an interesting time. Ken Harris, a Republican, was the mayor who would soon be replaced by Eddie Knox, a Democrat, in the 1979 election. The Governorship of the State of North Carolina was held by Jim Hunt, a Democrat who understood and tried to address the needs of everyday people. Through business interactions, sports exchanges, government contracts, educational trips, expanded development in the arts, advances in integrating our public school system, and cultivating relationships with sister cities around the world, Charlotte had become a classroom for national and global understanding.

“Charlotte was also a city of churches. Unfortunately, many times a few of the churches in Southeast Charlotte and many of the politicians from that area of the city were setting the political agenda and trends for the city and county. Of course, their actions did not sit well with many in the black communities. People often questioned the politicians’ motives, at least among themselves. But African Americans knew for sure that white politicians from Southeast Charlotte would set policies and agendas in private meetings at their churches and in their homes in total disregard for the greater Charlotte community. As Sarah puts it: ‘This created a problem: There were too many close-door meetings. We in the Black Political Caucus knew that the African-American voice was not being heard in the wider arenas of city, county and state government.’…

“ ‘Sam Young, the son-in-law of Bob Davis, brought the idea of starting a breakfast club to the Black Political Caucus,’ Sarah explained…. “He suggested that we could form a breakfast club patterned after the Andy Young Breakfast Club in Atlanta…

“Even today, people feel that the Tuesday Morning Breakfast Foum must continue because many issues in government have hit a repetitive stalemate or turned backward. The instrument for continuing to promote dialogue and progress is already in place. Many have said that we are stronger now; we have a place where we can come together and listen to each other. That legacy can’t be expressed much better than the words of Harvey Gantt, the former mayor of Charlotte, who said, ‘The Forum was known as the place to be on most Tuesday mornings.’ And today, the Forum remains as relevant as ever.”

“Let There Be Light” does not appear to be sold as a paperback or hardback book. It is available as a Kindle e-book from Amazon and as a Nook book from Barnes & Noble.

The prayer below is sometimes used to open the Forum. See June 14, 2005 Announcements:

May God bless us with discomfort at easy answers, half truths, and superficial relationships, so that we may live deep within our hearts. Amen.

May God bless us with anger at injustice, oppression, and exploitation of people, so that we may work for justice, freedom and peace. Amen.

May God bless us with tears to shed for those who suffer from pain, rejection, starvation and war, so that we may reach out our hands to comfort them and to turn their pain into joy. Amen.

May God bless us with enough foolishness to believe that we can make a difference in this world, so that we can do what others claim cannot be done. Amen.