Johanna Anderson, executive director of the Belk Foundation, is still weeks away from a formal announcement of a communitywide effort to improve reading. 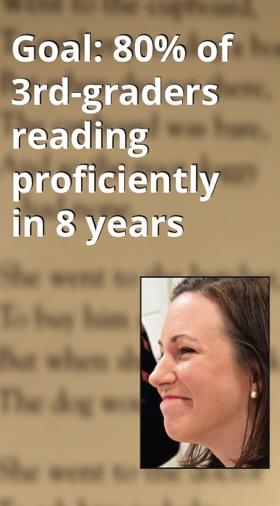 But she was at the Forum Tuesday to outline some of the scope of the planning that’s already been done;  to reassure people that many key decisions have not yet been made; and to elicit responses and listen to concerns.

Because of the Forum’s rules, Forum participants know to frame their concerns as questions. Some of the questions elicited basic details:

Other questions helped define issues that Anderson acknowledged were factors in low reading proficiency but were not likely to be tackled by the community effort. Among them:

In the second video, Anderson explained the four focus areas she expects to be part of the program:

Each of the four focus areas will have an advisory group. The nominations process for people to serve on those groups will be announced next month.

At the end of the fourth video below, Mecklenburg County Commissioners Chairman Trevor Fuller predicts the goal will be achieved. And UNCC College of Education Dean Ellen McIntyre points out that the project has already raised awareness of basic pedagogical issues among the non-educators involved. And she remarked that on the way toward achieving a broad public goal, a lot of adults will help have real impact on individual children.

One of the questions mentioned a “First 2,000 Days” video from the N.C. Early Childhood Foundation. That video is available at the bottom of this page.

An undated B&W version of a Read Charlotte presentation binder in color is here. By the time it was published the end date for the project had moved from 8 years to 10 years.

The first four videos below include both Anderson’s presentation and the extensive Q&A that followed.