An Open Forum brought a number of threads of community information to the floor. Lucy Bush Carter announced a new culinary jobs training program; that announcement is here. Two board members gave an update on “reorganization” at C.W. Williams Community Health Center; that material is here. There were thank-you messages from politicians (below) and a celebration of veterans (below) and an announcement about an Art & Soul event coming up this weekend.

But first, Superior Court Judge Linwood Foust with some comments about Election 2014.

Linwood Foust rose to tally the demographic changes on the local bench since he was elected a Superior Court judge in 2004. He also was asked about how budget decisions in Raleigh have affected access to justice in this community. His comments are below. 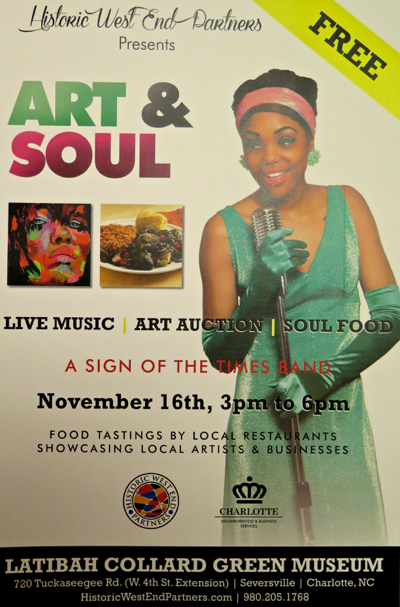 Judge Foust said he was a member of Historic West End Partners board of directors, so he had another event on his mind as well: the free Art & Soul presentation Sunday.

The live music, art auction and soul food event will be Sunday, Nov. 16 from 3-6 p.m. at the Latibah Collard Green Museum, 720 Tuckaseegee Rd.

“We are showcasing local artists and local businesses, most of which are restaurants,” Foust said. “You’ll be able to taste some of the food the restaurants have…. Now, don’t miss dinner or lunch, because it’s not that kind of thing: There will be samples.”

Facilitator Mary Foxx Johnson invited those in the room who had been successful in their Nov. 4 ballot quests to speak.

Looking to next time

On this Veterans Day, Forum facilitator Mary Foxx Johnson asked veterans in the room to stand and identify their years of service. The following participated: