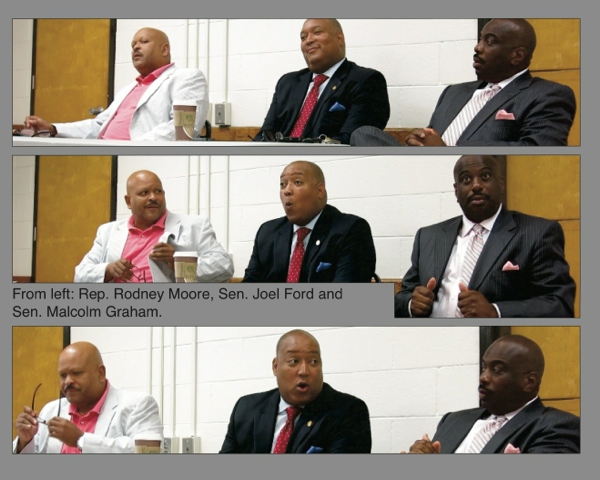 The need for an agenda for change in the African-American community. Problems with a road project. Nurturing minority contractors. Broadening the Forum’s list of topics discussed. There was a lot on the table today.

But we begin below with a discussion with three members of the Mecklenburg delegation to the N.C. General Assembly. And what a frustrated, unhappy bunch they appeared to be.

Rep. Rodney Moore and Sens. Joel Ford and Malcolm Graham are all Democrats. Graham offered the metaphor of riding in the back seat of the car, where you can offer the driver advice and warnings, but decisions about legislative direction are in the hands of the Republican Party, which controls both houses of the legislature and the executive branch.

All three men were outspoken about the damage they see being done by a Republican majority. One later described what was going on in Raleigh as “a battle for the soul of the state.”

After Tuesday’s 15-minute presentation, the two senators left for Raleigh, where the Senate continued to meet on budget and other issues. Moore said the House would not be meeting this week.

The presentation includes the three videos below. After making their initial presentations, the legislators fielded the following questions:

Q: Why aren’t the Democrats going on the offensive to tell their story?

Q: Would you repeat the size of the projected budget shortfall?

Q: Are the current splits among Republicans caused by policy differences, or personalities?

Q: As members of the minority party, are you able to do anything?

Q: What can we do to help you be more effective, other than voting?

Q: Everybody knows this is a money problem. If everyone paid their fair share of taxes…

Q: What are we doing to engage younger people?

Voices in the room: Gyasi Foluke on community change.