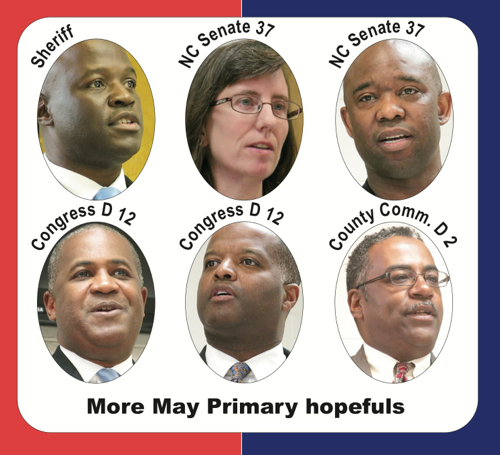 They came to talk about wanting to be sheriff. And county commissioner. And state senator. And member of Congress.

Tuesday’s speakers spoke on a range of issues, but many of the questions dealt with: Will you pay attention to us and the issues we need help with after you’ve been elected.

If you’re interested in comparing candidates running for the same seat or seats, please consult the index to all candidate videos that have occurred since March 18.

Video of Tuesday’s six candidates’ opening statements and their answers to questions are on separate pages. Links to those pages are below.

Two of Tuesday’s speakers are not no the May 6 voter ballot. They have declared their availability for a special May 3 Democratic Party election to fill Dan Clodfelter’s term representing District 37 in the N.C. Senate. They are:

Two of the candidates are involved in May 6 primaries for the 12th District Congress seat vacated by Mel Watt. They are:

The final two candidates are running for local offices in the May 6 Democratic primary. They are:

Forum videos generally present material in chronological order, which allows viewers to see what was said before and after a speaker’s comments. That benefit has been lost here, as content has been split by candidate, with a candidate’s introductory comments followed directly by the portions of the Q&A in which they participated. Very few questions were answered by all candidates. And in several cases, questions directed to a specific candidate elicited comments from other candidates.