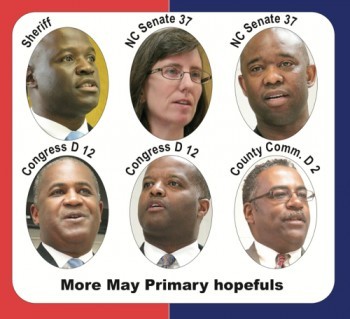 Darrell Bonapart was among the candidates in the May primaries who spoke today at the Forum.

Bonapart is among the candidates in a May 3 special election that will fill the unexpired term in the N.C. Senate that was created by the resignation of Dan Clodfelter to become Charlotte’s mayor.

Bonapart’s name is not on the May 6 primary ballot.

More on the special election for the N.C. Senate 37 seat is at the website of the Mecklenburg Democratic Party.

On Monday, April 28, the chairs of the Mecklenburg Democratic Party’s 9th Congressional District and 12th Congressional District Committees, Frank Deaton and Dr. Robbie Akhere, announced that they would moderate a forum, free and open to the public, for all candidates for the N.C. Senate District 37 seat, on Tuesday, April 29 from 6:30-8:30 p.m. at The Asian Library, 1339 Baxter St. Details here.

The video below includes excerpts from the Q&A session with the candidates. Only those questions answered by the candidate are included here.