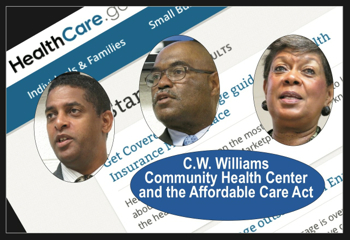 Tuesday’s presentation about the Affordable Care Act was long long long. It was a good primer in what’s been involved in the first round of signing up uninsured Americans for health coverage under the 2010 law.

It also came a day after a Charlotte Observer story laid out the leadership changes and financial stresses that have occurred in the last months at the federally qualified health center launched in 1981. That report closed with a characterization of C.W. Williams as being a victim of its success, with grant monies outstripped by the need for services that the organization set out to provide.

Also on Tuesday, County Manager Dena Diorio announced that the county would withhold the last quarterly payment on the center’s current community service grant, and not include the center in the county’s upcoming budget unless it receives satisfactory audited financial statements.

Participating in Tuesday’s Forum were Leon Burton, CEO of the center since April 1; Mark Batson, chief financial officer and former interim CEO; and Laura McClettie, hired last fall by former CEO Beverly Irby to assist in rolling out the center’s efforts to sign up Charlotte-Mecklenburg residents for coverage under the Affordable Care Act.

Excerpts from the Q&A will be posted anon.