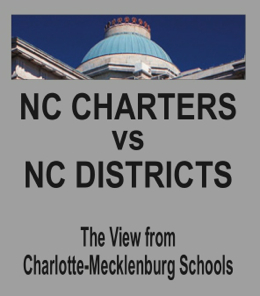 In a packed house with more than a dozen elected officials or candidates present, Tuesday’s session on public education in Mecklenburg unearthed deep disappointment over how all public schools in Mecklenburg are not meeting the N.C. constitutional mandate to afford every child a sound basic education.

Wading through the video clips below, which capture most of the morning’s presentation and Q&A, will be a useful learning experience for people new to this discussion. But the clips probablly will not capture the strong emotions in the room. And they certainly won’t convey the frustration level among many participants who, for their entire lifetimes, have been contending against inferior public school education mandated by the state’s separate-and-unequal education laws that were on the books in their childhoods.

So instead of beginning at the beginning, the clips below begin with the end, the concluding remarks by CMS Assistant Superintendent LaTarzja Henry, who designed the program, in which she issued a challenge to the Forum and the wider community to coalesce on a vision of how to move forward.

The speakers and commenters who appear in the clips below, in order of their appearance:

The full set of clips includes three from the initial presentations and five from the Q&A that followed.

In the video below, former CMS Board of Education Chairperson Arthur Griffin refers to a handout he had left on seats. That handout is here.