In his comments, Dr. Foluke references the Rev. Delwyn Rayson. More on Rayson is below.

From the Honolulu Advertiser:

A champion of social justice in Hawai’i, the Rev. Delwyn “Del” Rayson of Church of the Crossroads died April 22 in Minnesota.

Rayson’s son, David, remembers when his handsome, charismatic father began serving as pastor at Church of the Crossroads in the tumultuous 1960s, “one liberal member worried that he would be too conservative.”

That may have been the last time anyone said that about Rayson, who made headlines throughout his 8 1/2-year tenure for controversies from the theological to the political.

“It was a time of great excitement,” said Kikue Takagi, his administrative assistant. “He moved from one theological point of view to the most extreme. … People who had been in the church were disturbed, but youths flocked to it.”

For example, the church helped create the Freeway Coffee House, where students could go for coffee, tea and soup. It became a place for free-flowing ideas — and with the younger people came pot, said Takagi. A drug bust in 1967, when five youths were arrested, led to the closure of the coffeehouse.

“Del did it very nicely,” Takagi said. “He thanked police, and reminded the congregation we really needed to follow rules.”

The Rev. Neal MacPherson, the current pastor of the church and author of the historical “Church at a Crossroads” book, devoted a good chunk of a chapter to Rayson’s theology.

“He brought the world into the church,” MacPherson said this week.

That’s not all Rayson brought into the church. Toward the end of his tenure in Hawai’i, Rayson began talking about the “death of God” theology, and resigned in 1968 to take over a church in Minnesota. Soon after he left, the Church of the Crossroads’ sanctuary movement began, when the congregation offered refuge to Vietnam-bound soldiers.

“People often link him to the sanctuary movement,” said MacPherson, adding that while Rayson had already left, “he laid the theological groundwork for the church to take that kind of stand.”

Mits Aoki, who was a member of the University of Hawai’i’s religion department back then, said, “We really admired him so much. He had a following on campus.”

Despite Rayson’s ability to stir up controversy, in person he was very modest, friends recalled.

“When the moment is for him to manifest the truth of who he is, he stands out,” said Aoki. “Otherwise, he’s very reticent. … We loved him. We not only admired him, we really loved him.”

One of his daughters, Leslie Amundson, said, “We always had people at our house, sleeping in our backyard. My mother never knew who’d be coming home for dinner.”

Rayson is survived by daughters Leslie Amundson and Debbie Rayson O’Shea, sons Christopher and David, and six grandchildren. A service will be held tomorrow in Minnesota. Donations may be sent to St. Anthony Park United Church of Christ in St. Paul, Minn., or the Alzheimer’s Association.

From the Hawaii conference, United Church of Christ:

Former Church of the Crossroads Pastor Delwyn R. Rayson, 90, died April 22 in Minnesota. Delwyn served as pastor of the Honolulu church from 1960 to 1969. In addition to serving Church of the Crossroads during a time of great change, his strong sense of social justice called him to Mississippi to march with Martin Luther King, Jr., for voter registration and to be a laborer on a re-forestation project in Nicaragua.

Delwyn is survived by his four children, Leslie, Chris, Debby and David; their spouses, children and grandchildren; brother Glen, sister Rohanna, and many nieces, nephews, grandnieces and grandnephews. 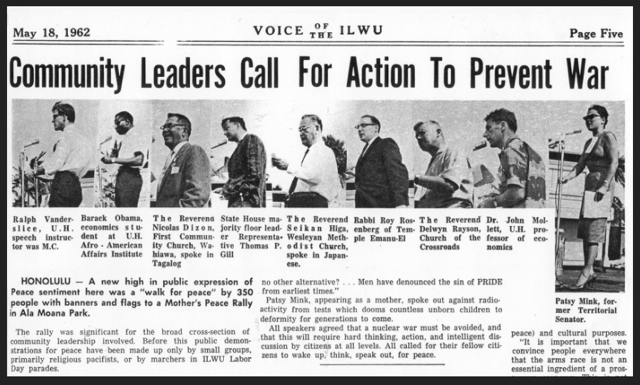 In May 1962, Rayson, shown in seventh picture from left, shared a peace rally stage in Hawaii with many people, one of whom was Barack Obama, second from left, the Kenyan whose child born the previous August was to become the 44th President of the United States.