By Kenneth A. Simmons, M.Ed.

One of the most horrific behaviors or set of experiences being presented on stage throughout America is bullying. Many experts agree that bullying may take on many different forms; however, bullying can generally be defined as deliberate and hurtful behavior repeated over a period of time or in isolated occasions, whereby somebody deliberately intimidates or harasses another.

Other forms of bullying may include any combination of physical, emotional and verbal abuse. Bullying affects everyone. It can be seen in the community, in the workplace and especially in our schools.

Of course, bullying is nothing new. Our immediate concern as caring citizens who purport to believe that our children are our future and our most valuable resources must seriously be about the task of curtailing this insidious behavior.

When children kill themselves or feel like committing suicide because of being bullied, it is our responsibility as adults, parents and professionals, to go to work immediately and get the job done. Perhaps, we can never completely eradicate such behavior due to the sociological, emotional and psychological ramifications surrounding it; we can do a much better job of curtailing bullying and minimizing the hurt and isolation that accompanies the victimization.

Parents certainly cannot cure this malady alone as they have no control over the behavior of children outside their homes. We can expect parents to listen to their children who may fall victim to this behavior and seek remedies from experts or from those whose position it is to oversee the affairs of children to keep them safe.

What agency or institution is more directly aligned to oversee the affairs of children than our schools, both publicly and privately? Of course, here we go again, placing a gigantic social burden on the shoulders of our school systems at a time when local and state governments seem to have turned their backs on public education professionals due to the recent economic downturn.

How about our churches? We seem to hardly ever hold them accountable for this aspect of humanity; this is a subject for a later date. Let’s not wait too long for addressing this area.

And then, there are other agencies receiving government funds, just as our public schools do, whose missions are to assist with social maladies, but we tend to ask, who is more directly involved on a day-to-day basis where the rubber meets the road and where the children are most victimized than our schools?

Thus, our schools must rise to the occasion and bear the burden if we genuinely are concerned and care about our most valuable resources, the children.

If our schools are to tackle this problem head on, then it is going to take more than bullying policies. Reactionary approaches have been the status quo. Meaningful prevention strategies to decrease the hurt and pain that our young victims endure must be implemented. We can, if we choose and truly care enough, come very close to putting a halt to this cruel and ongoing anti-social behavior.

The answer to this age-old problem has always been right here in our own back yards. There has never been a reason for us to have to travel over the rainbow as Dorothy did in The Wizard of Oz. 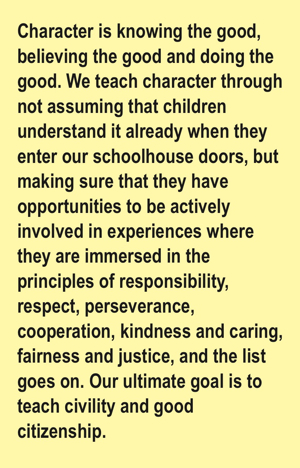 Understand that there will be naysayers who will decry that it is not the role of the school to teach what should be taught in the home, churches, mosques and synagogues, but can we allow another decade to pass and watch so many children literally dry up on the vine and die as is occurring across these United States of America, the same America that we boast of as being the greatest nation on the planet?

Early on we must denounce such naysayers and not allow them to distract good intentions, for there is a war going on, and at this time, any detractor can easily be seen as the enemy.

Like any good and effective program, there must be support from the top. This support has to be more than lip service from the superintendent, and must be well-understood and approved by the school board, top administrative teams as well as community leaders.

We came close to having this buy-in before, but that which tore at the mere fabric of this program and prevented it from flourishing and making a difference for boys and girls has been, sorry to say, the fact that character has to be modeled on a day-to-day basis from the top down.

If the leader or leaders lack character, then the program is doomed; it does not stand a chance for survival, and if we are fair to ourselves, it should become quite clear as to how such a wonderful and well intended program could have corroded over the years, even though there were always a handful of schools that implemented state of the art character development programs.

Good and effective character development programs teach children, staff members and parents, first of all, what it means to be good.

Character is knowing the good, believing the good and doing the good. We teach character through not assuming that children understand it already when they enter our schoolhouse doors, but making sure that they have opportunities to be actively involved in experiences where they are immersed in the principles of responsibility, respect, perseverance, cooperation, kindness and caring, fairness and justice, and the list goes on. Our ultimate goal is to teach civility and good citizenship.

When character development programs are implemented effectively, they are seamless; they are not seen as another program to be dumped upon the many others that are mandated by local administrators and the state. Character becomes the culture of the school and is integrated into all that takes place.

Bullying has no place in such an environment and will eventually eradicate itself. Even adult bullies feel out of place when character and goodness become the norm. Bullying and goodness cannot coexist. To solve the problem of bullying, we must all step up to the plate. We must all have our character and moral compasses checked.